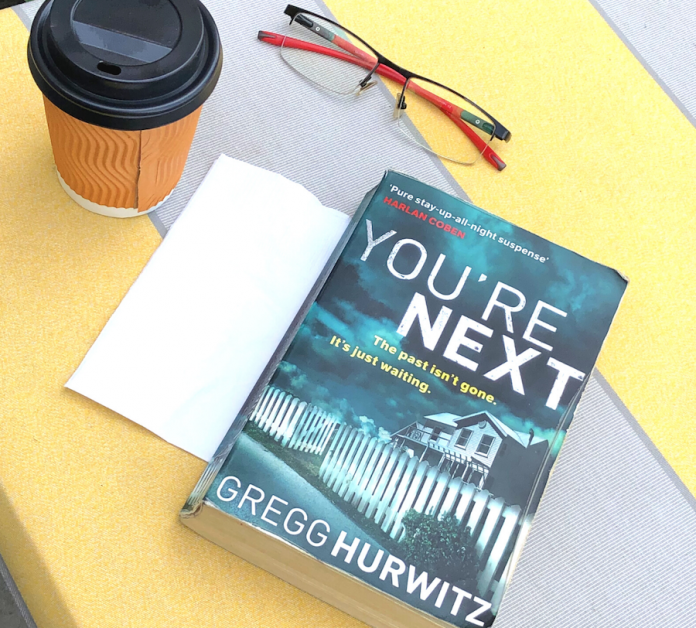 YOU’RE NEXT… by Gregg Hurwitz is the 11th book. Sadly, I was late to know about such an amazing book. This is my first novel by Gregg Hurwitz and he is already in the list of my favourite authors. Just one book and I have become a huge fan of this author.

The story opens with a four year old boy, brought to foster home by none other than his Dad, promising him that he’ll return to get him. The four year old Mike has this faint memory of his childhood where his father drove him to a foster home and had a patch of blood on his Dad’s sleeve.

Years passed for Mike at Couch Mother’s foster care with a bunch of kids that were never wanted by society. The ray of hope in Mike’s heart slowly diminished before it died with all those passing years. But, a bond was formed between Mike and Shepherd White, another notorious kid with criminal tendencies. Together, they become the tiny buds of the criminal world with Mike watching Shep’s back.

At their third fall, Shep was about to become a convicted felon but Mike takes the blow before falling apart from Shep. ‘Loyalty and Stamina’ were the pillars of their relation. That was the last time Mike and Shep were together.

With a new identity as Mike Wingate, he works for years to establish himself as a white-collar man with his construction firm. He has a lovely wife Annabel and a cute daughter, Kate. Things were so good for him and life was getting better with his green housing project. The limelight was of this project was about to bring a fortune for the Wingate family.

With the award from Governor’s hand, Mike was now a kind of public figure and that’s when his past comes to hunt him down with two bad guys, William and Dodge.

Mike thinks it is the PVC pipes blunder in his green housing project but it is far more than his future. It is his past now coming to get him. Things start getting ugly with the Wingate family on a roller coaster of chaos.

Soon running out of options, Mike can now count on the only person on this earth, Shep. With only Shep on his side, Mike is struggling to come out clean from the red flags raised on his name by every security agency of the country.

Will Shep turn his back on Mike…?

Will Mike be ever able to save his family that is hanging through a thin thread…?

What is this past of Mike that is about to shatter his present…?

Are William and Dodge the kind of guys that Mike thinks about them…?

To get all these answers… Don’t miss out… You’re Next… By… Gregg Hurwitz.

MY OPINION: YOU’RE NEXT… Yes… If you have not read this book then for sure you are next, to read this book. It is an awesome breath-taking thriller with nail-biting suspense that will drive you through the whirlpool of emotions you’ll have never dreamed of. I really regret coming so late across this title.

The crafting and nurturing of the character is so aptly done that you can see them running through your mind. The care of tiny details and absolutely engrossing narration had made the story intriguing.

The pace of the story is not uniform. The beginning is slow and you may find an excuse to keep the book aside. But, just as you cross a few chapters, the story goes with lightning speed. The events and incidents occur at such a fast pace at the tail of each other that it would be difficult for you to keep the book aside. I finished the rest half of the book in just one go as my anxiety to know what will happen next kept crawling all over my nerves.

Though the book is superb, all you need is some patience to read it. After all, every good story with such a thrill needs to get justified with the patience of readers. All you need to do is go with the flow of the plot.If you have not read the book yet then just go grab your copy now cause… YOU’RE NEXT…

EVERYTHING AT STAKE Part 2