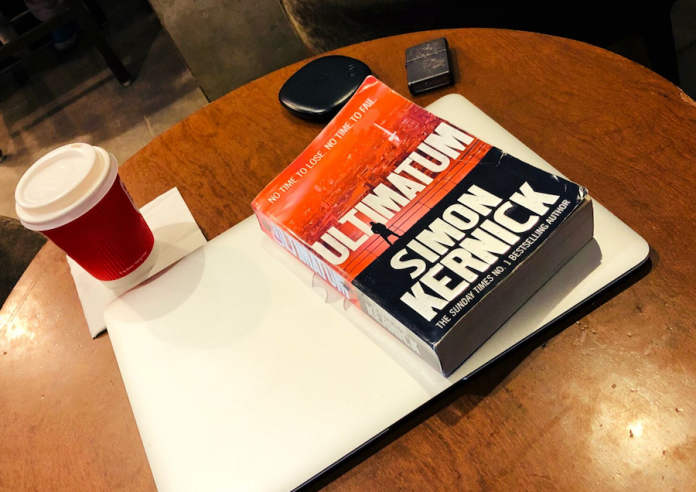 A conspiracy, a terrorist attack and a lot of adrenaline pumping action with breath taking suspense, that’s what Simon Kernick is famous for. A complete package of fiction which has been presented by him in the title ‘ULTIMATUM’.

8:00 a.m., London was rattled with the sound of plastic explosive loaded with shrapnel that ripped apart everything and everyone inside a coffee shop. This marks the beginning of the terror day with the first attack.

Soon, the authorities receive an anonymous call claiming the responsibility of the blast and further threatening the government to decide on withdrawing British troops from Afghanistan with a deadline of 12 hours. That was the final ultimatum to save London from bigger damages in the next 12 hours.

What appears to be a solution for the government is just a facade with hidden agendas of the terrorist behind it. And that couldn’t be deciphered by anyone in their wildest dreams.

A dangerous terrorist, Fox, behind the bars, claims to know the people behind the recent terrorist attack. Fox will spill the beans only to Tina Boyd, D.C. at a steep price.

Boyd, widely known as a BLACK WIDOW in her department, is a high risk-taking and never go by protocol cop. With Boyd in the vicinity, troubles are easily attracted to her just in a nick of time. Boyd teams up with Mike Bolt, a member of CTC and a close old acquaintance of Boyd to hunt down the people behind the attack and to stop the further damages.

Mike has an insider in the terrorist group, Jones. Jones has his share of past which finally landed him up at the feet of Mike, courtesy Mike Bolt.

The clock is ticking and the race against time is on with the second attack. Tina and Mike trying their best to crack the nuts out. Terrorists on the other hands are trying their best against all odds to launch the final attack by 8:00 p.m.

Only Fox knows the real agenda behind the attacks. Is he playing dirty with cops by passing partial information…?

Why is Fox betraying his own people…?

Will the final terrorist attack be prevented…?

Will London standstill or crumpled down to pieces…?

To know more… Must read… ULTIMATUM… by Simon Kernick.

MY OPINION: Another fast paced, the masterpiece is given out by Simon this time. It is an action pack novel where you don’t need to wait for the action to begin.

The story starts with two different points in the first two chapters and you don’t need to wait for the plot to get connected as the third chapter starts connecting it with spine chilling suspense.

The chapters are short and that’s one of the best parts I felt. It keeps you intrigued to turn to the next page.

The plot is fast and the role of every character is aptly justified and crystal clear. Thought the number of characters is many, I didn’t feel any of it slowing down the story.Lastly, I’ll say that when you are done reading, all you’ll say is OMG… A must read book and need to be in your book collection… Ultimatum…