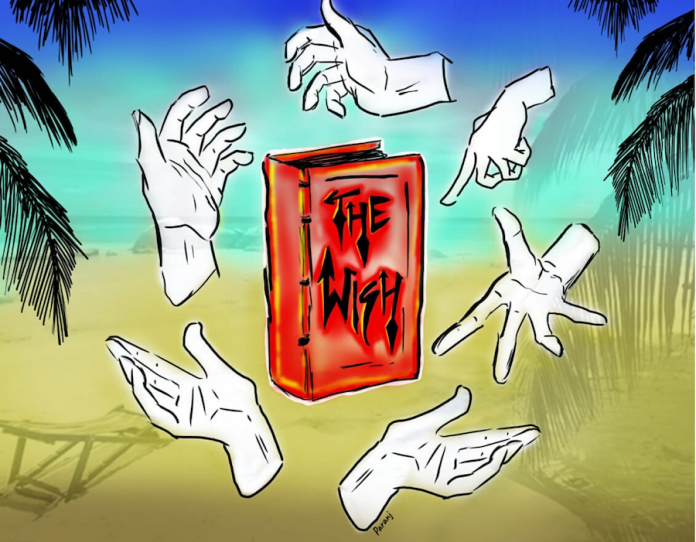 Next day, Natasha and Ronny were sitting across the breakfast table at one of the beach shacks. The place lacked the pomp and show of a five star hotel but the food was just beyond thoughts.

“What you will do now?” Natasha asked taking a bite of her blueberry muffin.

“Job hunt… What else is left for me now…I don’t own a club like you.”

“Hmmm…” Natasha was quiet then, looking at the serene beauty of the day. Sensing something was going within her, Ronny broke the silence

“Actually, I am tired of this job thing. I am fed up with taking all this bullshit from the managers and bosses.” Ronny gently pushed the plate away, displaying his dissatisfaction with the JOB.

“What else are your options?” Natasha asked looking straight into his eyes. There was something taking shape at the back of her mind too.

“I don’t have any…” A rueful smile on Ronny’s face was enough to give a hint to Natasha.

“Well…” Natasha played with her fork trying to gather the words.

“Well… I am waiting for your words…” Ronny leaned forward looking into her eyes.

“I was thinking something big. Goa is good but club business is seasonal and seasons are generally short here. I want to expand where this seasonal or tourist shit won’t be the factor.” Natasha finally let the cat out.

“And that place could be Mumbai or Delhi.” A ray of hope struck Ronny who was now all in the conversation.

“I like Mumbai. The place is more happening and full of party animals.” Natasha was slowly taking charge of the situation.

“So, what you are waiting for? You have money, you can easily get a place on rent. And come on, you are in this business for long, you know in and out of it. Hell, what are you waiting for?” Ronny in excitement dropped the fork.

“Yeah, you sound good, though the plan of setting up a new club there would be like being a part of a herd. Nothing new. And if I am not able to give something new my chances of survival sink. ” Natasha spoke with twitched lips and raised eyebrows.

“Sorry, I didn’t get you?” Ronny had not seen this coming from such a bright girl. Natasha closed her eyes taking a deep breath before speaking.

“Listen, I saw what you did yesterday. It was truly amazing and I know it was not all that you have got. If we talk about it at a professional level, I am sure what I saw yesterday would be just a glimpse of your skill.” She paused to let her words sink in Ronny’s head.

“Go ahead, I am all ears.” A faint smile was taking shape on his face now.

“I want you to be my partner…” Natasha finally spoke exhaling the sigh she was holding back for a while.

“But I don’t…” Natasha cut him in between and continued.

“I know you don’t have that money to invest but you can manage the whole place. I mean you have a lot of experience regarding it. You know in and out of it dear. You can be my working partner with profit sharing of 50 percent.” Natasha kept her fingers crossed under the table.

“I can, I mean, I know how to run the place and rest you know how to manage but…” Ronny left his words in air biting his lower lips.

“What you thinking? It’s a change in your life where you’ll be your boss. Just like the way you always wanted.” Natasha was pushing hard to convince him.

“I know that but am not convinced by your choice of a person whom you met just a few hours ago. You might have many contacts waiting to accept your business proposal.

“Reason is simple,  I have always followed my gut. No more discussions on it dear, let me know your answer when you are ready with one.” Natasha got up to leave.

“Natasha…” Ronny held her wrist to make her sit back.

“Let’s go for it…” Ronny gave a firm handshake stamped with a pretty smile.

For the next two months, Natasha shifted to Mumbai along with Ronny, they got all drenched from head to toe in the work. Within two months their club was ready to rock the city.

The response from the city of dreams was more than they both anticipated. With new place and Ronny as a partner, the news travelled faster than light. Music was the most attractive feature of that club and Ronny’s bartending shows became the soul. The cash flow was hefty with high profit margins from the very first month.

Everything was going smooth in Ronny’s life. He was living the life he had dreamed of, a luxurious club, a lavish flat, and cars. With a couple of months more, and he would get committed to Natasha and settled down. The spark of love was always between them.

It was weekend and Ronny was driving back late night from the club. Natasha had some of her old friends from Goa and so she decided to stay back with them. It was a long tiring day for Ronny and with shots of vodka he was not in a state to drive but he still did.

Couple of hours later, Natasha got a call from Mumbai police that Ronny had met with an accident and was in ICU. Ronny lost his control over the car and rammed into a truck ahead. Natasha immediately rushed to the hospital with friends to find Ronny being seriously injured and on life support.

“Where I am? And what happened?” Ronny’s head was hurting badly, partly of injuries and partly of sedative meds, he was kept on.

“You had met with a terrible accident but you are a lucky champ, you are all good now.” Natasha then narrated everything in detail.

“Damn… I should have taken a driver or at least cab that night.” Ronny replied with a lopsided smile hanging on his face. Natasha too gave a rueful smile.

Something was not right, something was terribly wrong. It was a secret until Ronny asked for a glass of water which he tried to hold with his right hand. His right hand ended at the elbow. The accident cost Ronny his right hand, his magic stick of all his skills.

Ronny couldn’t bear the shock. He just could not believe that he is now in the category of physically handicapped people who have amputated limbs. Ronny’s career as a bartender or rather a showman in the world of the bar was over now. He was shattered with this blow of nature.

Natasha had been strongly supporting Ronny through all odds and even. She took great care of him, trying every second to get him back to life.

“I am fucked up Nats’. I have no future now.” Ronny closed his eyes sipping his Jack sitting in the terrace garden of his penthouse.

“Oh please, Ronny, stop being that pessimist. We have a club which is the best in the city.” Natasha tried to cheer him up but it was all in vain

“But I won’t be able to perform any show hence forth. It was my life, my identity, the very purpose of my existence.” Ronny gulped down his drink, it did burn but couldn’t soothe his tormented mind.

“You know what, Ronny? You need a break. Why don’t you go on a solo trip and have some time with yourself? Why don’t you go back to Goa, it has been your first choice.” Natasha kept her arm around his neck and gave a peck on his cheek.

“Sounds good. It had proven as a blessing to me when I last landed there and met you, my life.” For the first time, the smile on his face was real.

Next day, Ronny was on board to fly to Goa for a week. He booked the same resort he had stayed previously and was at the same beach with his beer and trance music blasting in his headphone.

Deep in his heart, Ronny wanted that diary, THE WISH again. He had now a lot to write and he knew that all will come true. As the sun kissed goodbye, he started his walk along the beach with that same water kissing his feet and stealing away the sand below his feet.

Ronny took a deep breath; he could feel the same energy he felt when he came last time and that soared his hopes high. Ronny even tried digging in at some places but couldn’t get it. Dejectedly, he walked back to his lounger. Whoa, the WISH DIARY, it lay just next to his lounger., half stuck in the sand.

Ronny’s joy had no bounds. He immediately picked it up and dusted off the sand. Before he could sit and write his new wish, his cell buzzed. The call was from his club in Mumbai.

“Yes… Who’s this?” Ronny felt strange as that number was used by his staff to call him

“I am Inspector Shinde from Mumbai police. There is an accident at your club.” Inspector paused to let Ronny get the gravity of the situation.

“What…? What happened?” Ronny could not understand as to why Natasha didn’t call him. I am sure it won’t be anything major but then why police are there, Ronny mumbled to himself

“There was a short circuit at your club which had led to an explosion. I am sorry to inform you that your club is burnt down to ashes now.

“What…? What are you saying…? How it is possible…? Where is Natasha, my partner…?” Ronny was rattled with the news.

“We are not sure but …We think she could not make out of the club.”

The cell phone slipped from Ronny’s hand and he fell on his knees now. He couldn’t fathom what had happened. He could not believe that the only reason of his life was dead now, Natasha was dead.

Tears started streaming down and Ronny howled loud. His cries were high to breach the sky and bounds of oceans. He cried inconsolably when a shadow overcast him.

Ronny looked up with teary eyes to see nothing but a Devil standing in front of him.

“Every wish has a price to pay.” His laughter rattled more than thunderous lighting and disappeared in fumes of black smoke.

Ronny’s body was discovered at the beach the next day. The possible reason was cardiac arrest.