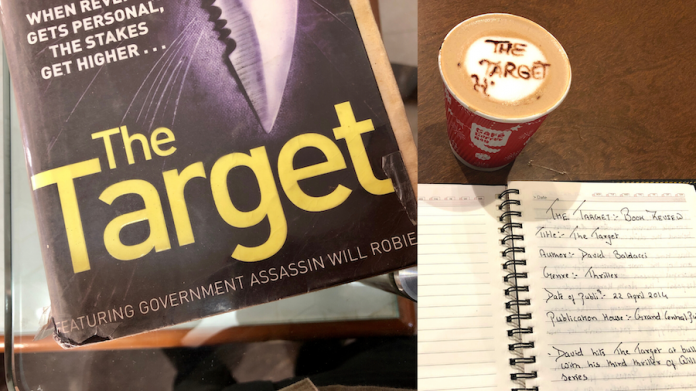 David Baldacci has hit the bullseye with his third thriller of Will Robie series, THE TARGET.

It is always expected with David’s work to be at the next level but this one has been a step more ahead of what was expected and presented a fast-paced, nail biting with adrenaline pumping action in this book ‘THE TARGET’.

A tail of his previous book ‘THE HIT’ is picked up where two CIA agents Will Robie and Jessica Reel had gone rogue, killing the people on their side inside the CIA.

The POTUS had always been taking trouble making, hardcore decisions behind the dark curtains in his secret chambers. His core team comprises not more than three people who are in high flanks of the national security agencies of U.S.A.

This time, POTUS has planned to bring down one of the most notorious yet very powerful person with nukes at his disposal, the North Korean leader. If anything goes wrong… The North Korean retaliation will certainly lead to apocalypse and POTUS can’t let that happen.

With the spies in the highest rank in North Korean military, POTUS is firm to carry out his illegal and deadly mission. All he needs now is a team of impeccable agents who can hunt down everything that comes in their way.

Will Robie and Jessica Reel are a perfect choice, recommended by the highest CIA official and core member of the POTUS team for this suicide mission. The reason for selecting this pair is the personal grudge carried by CIA officials against Jessica Reel because of her past actions.

Robie and Jessica are sent to Burner Box, a CIA training facility in North Carolina where they are subjected to every lethal treatment including waterboarding.

While POTUS is busy in executing this lethal plot, their spy is exposed, leading to a high voltage tense situation.

Robie and Jessica are sent to clean up the mess and to save the lineage of their North Korean connection, triggering a retaliation that U.S.A. would have never anticipated for.

Chunga Cha, a North Korean version of Robie and Jessica is on a deadly mission. She is a survivor of the notorious labour camp of North Korea and a ruthless killing machine.

That’s not all, at least for Jessica Reel as the ghost of her past comes haunting her. The ghost of his family and personal life before she stepped in the CIA.

Will POTUS be taking the backfire of his delirious decision to bring down the North Korean leader…?

Will Jessica and Robie be able to pull off these suicide missions…?

What Chunga Cha is up to? Will she bring the apocalypse nearer the world had been ever thought…?

To know more… Read… THE TARGET… By David Baldacci…

MY OPINION: ‘THE TARGET’ has really hit the bullseyes. I have read many books by David Baldacci but this one I must say has given me the most goose bumps.

The book is truly action packed with lots of missions and the details pertaining to the reality of certain parts of world. And that is what has made this book unputdownable.

What I felt different in this book is that it has a side plot too, I have never seen that in any other book by this author. The side plot too is very interesting but somehow, I felt that it is not that necessary for developing the story. Nor it is lowering down the level of the thrill, but somehow it is not getting connected to the main story line.

What I liked most about the book is the other side of Robie and Jessica coins, the North Korean assassin, Chung Cha. The character building and nurturing is superb.A must read book if you searching for action pack story more than online streaming. Don’t miss ‘THE TARGET’.