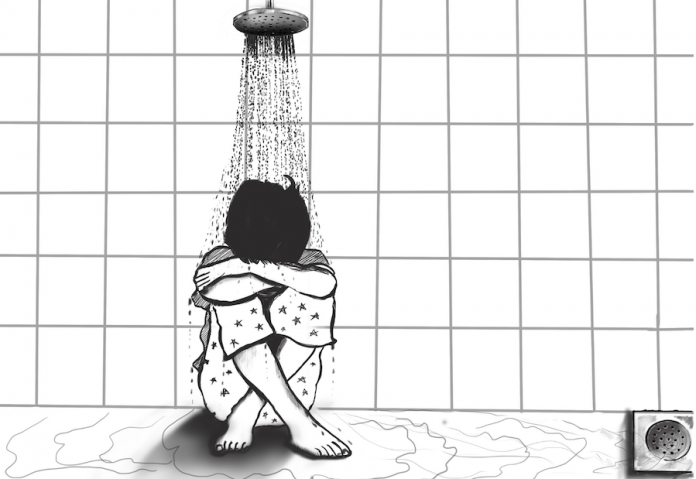 The shower was turned off. Drops of water still dripping through it. He was sitting under the shower with knees clenched tightly to his chest. As he blinked the water drops kept dripping down his eyelashes. With every drop that went down his eyes as he blinked, the memories of his childhood kept tormenting him.

It had been 24 years, but he still could not get over it. Nights filled with the nightmare, jolting him and there were nights when he would be sitting on his bed sweating badly. He had done nothing to overcome his childhood trauma. Rather, what could he do? He was so terrified then as a kid and had no clues as to whom should he share that incident with.

It had turned into poison now. His mind had weaved a fence around that incident and that turned it into something which he never thought of.

Madhav was a cute, innocent boy as a child. Like every kid in 7th grade, the summer break was the best time, he used to wait for. It was then that, he had all the freedom to play for the whole day with his friends. The only thing that Madhav never thought was that one of these summer vacations will give him the scar for the lifetime.

It was a kind of routine for Madhav to play cricket with his friends in the front yard during the holidays. Shila aunty, a housewife in her late thirties used to live with her husband and always allowed kids to play in her front yard. Her love for kids was pure even though she herself was childless.

Madhav also used to play with his friends there for the whole day.  She often used to make lemonade for the drained out kids and even used to tell stories that had moral values. The entire society knew about this unconditional love of Shila. She even made snacks for the kids and even allowed the kids to play inside her house during hot sunny days. She was a motherly figure for all the kids of society.

Shila’s husband, Deepak used to work for an MNC as a marketing head. His job always kept him out of town but Shila never complained about it. It was his way to keep himself busy and not think about his impotency. Shila aunty could understand the pain that her husband was going through. And thus never complained about his busy schedule and workaholic nature.

Deepak too could sense Shila’s pain and knew how she tries to confide it by letting the society kids to play around her. He never objected to it and always supported her. Deepak uncle also used to bring sweets and goodies on various festivals for the kids of society.

It was one fine noon of the summer breaks when Madhav was playing with his friends at Shila aunty’s house. As the sun was getting brighter kids were turning hungry and it was the lunchtime for all, everyone started dispersing slowly. Madhav was only left there. While he was busy gathering his stuff, Shila aunty came and sat next to him.

“Madhav, do you want to eat some cake? I made it in the morning.” Shila aunty asked while ruffling Madhav’s hairs.

The name of the cake was enough to get Madhav drool. He immediately nodded with his tiny sparkling eyes.

“Yes, aunty, I love cakes.” Madhav packed his stuff and kept it aside.

“Fine, just grab a chair at the dining table, I’ll get it in two mins.” Saying so Shila aunty kissed his forehead and went into the kitchen to get the cake for him.

Madhav excitedly sat on the dining chair and was eagerly waiting for cake. Aunty came in a few mins with a large piece of chocolate cake and salted almonds.

“Oh wow, I love these almonds too, aunty.” Madhav’s eyes were wide open to see the cake and those almonds.

He started hogging the cake and also stuffed a handful of almonds. Shila aunty sat next to him caressing his back and cheeks.

“Madhav, can you help with some work upstairs in my room? After you have finished your cake?” Shila aunty asked looking straight into Madhav’s eyes.

“But Aunty I have to go home for lunch.” Madhav replied sceptically. Its ok dear, you can come after lunch. I have a few boxes of old stuff to pack. You can help me with that.” Shila aunty smiled again ruffling Madhav’s hairs.

“For sure then, I will come back in an hour.” Madhav wiped his mouth and left for home.

After the quick lunch, Madhav took the shower and went back to Shila aunty’s home. He pressed the doorbell but no one answered. He pressed again after a few more seconds.

“Madhav, the door is open. Come up directly into the room and closed the door. Do latch the door properly.” Shila aunty said loudly to be heard by Madhav from the balcony of her room above.

Madhav reached up and saw Shila aunty sorting out old clothes from her wardrobe. He went in and sat on the bed next to the closet.

“Where are the boxes aunty?” Madhav asked looking around the room to find few.

“Ah! It’s in the other room. I’ll get it.” Shila aunty smiled at him and walked to the door. She didn’t step out of the room and turned to look at Madhav who was busy playing with a table lamp lying next to the bed.

Shila aunty closed the door and walked to Madhav and sat next to him on the bed. Madhav who was lost in playing with the lamp was jarred when Shila touched his shoulder.

“What happened aunty? You didn’t get the boxes?” Madhav was now not as comfortable as he was when came.

“Madhav…” Shila aunty looked straight into his eyes leaning forward, her warm breath was easily felt by Madhav on his face. He was now getting scared of Shila aunty.

“Is everything ok aunty?” Madhav asked pushing himself back on the bed with the elbows till he struck the pillow behind. Shila didn’t answer and grabbed him tightly from his shoulder and started kissing his face wildly.

“Aunty stop it, what are you doing?” Poor Madhav tried to resist but he was so small to push the Shila away.

“Ssssshhh….”She silenced Madhav by keeping her lecherous finger on his lips. The eyes of her were not of a motherly figure anymore. Madhav was shivering. His throat was parched and his voice had sunk deep in his throat. He wanted to scream but words failed to come out of his mouth.

“If you won’t do as I say then I will do something that will shatter your family. Your father will leave you all and your mother will commit suicide and your family will be no more together. I will tell your parents how you misbehaved with me and that will end up your father beating you to the black and blue.” Shila was smiling like a witch now.

Madhav was shocked and terrified. He could not believe why Shila aunty is doing all this and the terror of what she wants to do with him left him shivering.

Shila’s finger started rolling down from his lips to his shirt to unbutton him. Tears started rolling down those innocent eyes but his lips were sealed tightly. Shila finally, pushed naked Madhav on the bed and she got her self-undressed. Madhav closed his eyes but a tight slap on his cheeks made him open his eyes.

“Look at me. Let your eyes see my bare skin, every inch of my body.” Shila screamed as she tossed her bra away. Madhav tightly clenched his knees to his chest. Shila looked at him with furious eyes. She slid to the bed and opened the drawer next to the bed and pulled out a blue nylon thin rope.

Before Madhav could comprehend what she is going to do next, Shila tied his wrist with hands widespread above his head to the bed. Next, she gripped his ankles and spread his legs wide apart and tied them to the rear two poles of the bed. Madhav was now tied from all four sides.

Like a wolf, Shila jumped over her prey and started rubbing her breast on the body of a kid. With every touch, chills kept running down the body of Madhav, giving him goose bumps. He clenched his tongue between the teeth so hard that a cry of pain escaped out of his mouth.

Shila slapped him again and started biting the inner thighs and abdomen of Madhav. She reached to his chest and kept biting his tiny nips that made Madhav scream more in pain. Shila got angry and she gagged his mouth with a towel lying next to the pillow. Tears kept rolling down the edges of the kid’s eyes and he could do nothing at all.

Shila took his tiny little chode and pressed it between her breast, rubbing it. The sheer pain struck him but he could not scream this time. Finally, Shila’s nails scratching his abdomen and thighs.

Shila kept slapping his chode and then finally slid over him and jumping on him. The physical and mental pain had rendered kid stoned. He was feeling nothing but the pain of hell.

Shila finally got her satisfaction and she climbed down the poor boy who was numb to anything now. Shila walked into the bathroom. She got dressed and wiped the body of Madhav who was still tied to the bed.

“If you tell this to anyone, I  promise you, to turn every word of mine to reality.” She smiled and untied the kid. Poor kid closed his eyes not caring to cover his thrashed and raped body. Shila dressed him back and asked him to leave.

“Madhav, remember one thing. Whenever I ask you for a cake, you’ll have to stay here till all the other kids leave and you’ll have to come here. Is it clear?” Her voice was stern and assertive.

Madhav didn’t look back and just nodded. He had left no courage to look into her eyes. Once a motherly figure, now a bloody psychic bitch who raped a flower fragile kid.

Madhav ran to his house without looking back and rushed to the bathroom of his room. He shut himself in and turned the shower on. Madhav couldn’t utter a word and silent tears kept rolling down his eyes, getting mixed with the drops of water from the shower.

Shila’s torture continued for a month. Every afternoon was like a hell for the kid and he used to stay under the shower for hours together, crying.

Finally, Madhav’s father got transferred to another city and they shifted immediately. Madhav was saved from further torture but the hell that he had been through for a month would not leave him ever in his life.