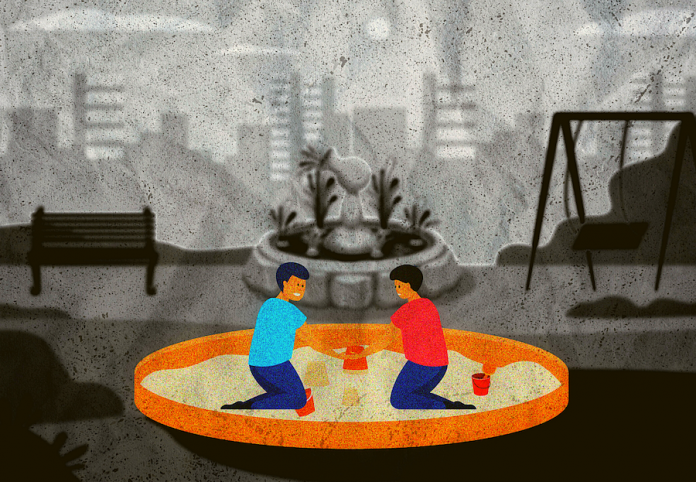 “My holidays are beginning next week. When does your summer break begin?” Yash asked as they both were playing in the sandpit. Yash then realized that he didn’t know which school Ansh went to.

“Which school are you in by the way?” Yash asked to which Ansh was focused on making the shapes in the sand.

“I stopped going to school long back.” Ansh replied looking straight in the eye. It was kind of weird, Ansh’s face began to turn stone cold and stern. Yash was about to ask further but the curt tone of Ansh made him quiet.

“But it’s a story time now.” Mr. Mehta spoke as he walked with Mrs. Mehta towards the kid.

The weird feeling of Yash about the way Ansh behaved vanished in the sweet story of Mr. Mehta.

“Today we will have two ice creams.” Mr. Mehta spoke as the story ended.

“Cause tomorrow is the birthday of Ansh.” Mr. Mehta affectionately stroking the hair of Ansh replied.

“Wow… I just love celebrating birthdays…” Before Yash could pour down his excitement, Ansh cut him short.

“I don’t like my birthday.” The cold stare from Ansh sent chills down the spine of Yash.

“But…” This time, Mr. Mehta spoke before Yash could fire a volley of curious questions.

“Ah… Not again, we are not going down that track again Ansh please…” silence prevailed longer for seconds or minutes to track.

They quietly enjoyed the ice cream. But Yash had made up his mind. He had already planned in his head that he would bring a cake for his new friend and will celebrate his birthday in the park.

Next day, as per Yash’s plan, after school he finished his lunch quickly and rushed to get a small delicious cake for his friend, Ansh. With some balloons and party poppers, Yash reached the park.

Mr. Mehta along with Ansh and everybody else was also surprised by such a lovely and sweet gesture of Yash. They cut the cake and played together and every now and then the couples sang one liners or rhymes for Ansh. It was one of the most fabulous evenings in the park after a long long time.

Sameer was home early that day from his work while Anjali was still busy at the bank. With nothing much to do, Sameer thought to spend some time, playing with Yash at the park. After all, Dads are the first and best friends of their sons.

Sameer freshened up and walked to the Park. Sameer was surprised to see nothing there. There was a big rusty gate and the fence around it was covered with thorny bushes. Sameer walked closer to see the deserted patch of land. His heart started throbbing loudly as he stepped closer to the gate. What he saw next left him startled.

Yash was sitting on the grass with the remaining cake and blown up party poppers. He was laughing and talking loudly to no one around him. Sameer ran to Yash and jolted him.

“Yash…” Sameer could not fathom what his son was doing alone there and damn… with whom was he talking?

“Hey Dad, what a pleasant surprise.” Yash was surprised but he could see his father was aghast. However, he could not understand the reason.

“Mehta Uncle, this is my Dad, and Dad this is Mehta Uncle.” Yash introduced Sameer who was shocked to hell. He couldn’t understand whom his son was talking to.

“Yash… whom are you are talking to …? There is no one around.” Sameer shook his son grabbing his shoulders.

“Dad… These all are my friends… It was Ansh’s birthday today and we were celebrating it.” Yash was terrified too by his father’s reaction.

And then something happened that Sameer could never have dreamed of in his worst nightmare. The whole garden slowly came to life and Sameer could see the faint smoke lining up into human figures and he could see the floating figures of Mr. Mehta, Ansh and others that had been present there. Sameer fumbled back and fell on the ground, taking support of his elbows.

Things stabilized and Mr. Mehta who was sitting near Ansh and Yash spoke.

“We are here in the park, we live here. Only your son could see us and play with us as he is an innocent boy like Ansh was once upon a time.”

“What happened here…? And who are you all…? Please don’t do anything to my child.” Sameer grabbed Yash and wrapped him in his arms. A terrified father kept looking at those ghosts with his eyes wide open.

“Don’t worry Sameer, we don’t harm anyone. Just calm down.” Mr. Mehta offered the bottle of water that Yash had been carrying. Sameer took the bottle and with shaky hands and sipped some water without taking his eyes off what he saw in front of him. Mr. Mehta took a deep breath and answered the questions that were rumbling in Sameer’s mind.

“We all lived here, in an old age home that belonged to me. It all happened 20 years ago. All these people you can see here, once stayed here with us and this was our small garden.” Mr. Mehta was taking his time to let his words sink in Sameer’s head.

“There was a builder who wanted to buy this place but I denied. This place was a home for all those homeless parents whose kids didn’t want them to stay with them anymore.” Mr. Mehta kept narrating with moist eyes.

“What happened then?” Sameer’s curiosity and eagerness got the better of him. This was so unreal for him.

“It was Ansh’s birthday, he had always celebrated his birthday with us at the old age home and his parents too supported his decision as Ansh didn’t have any grandparents.” Mr. Mehta paused with a heavy sigh. All the souls around him were reliving that horrendous day.

Sameer stayed quiet and patiently waited for Mr. Mehta to continue. He could not fathom what was ahead and it was the most horrific reality he would ever come across in his life.

“Ansh’s parents got a call so they left in hurry with a promise to return soon and till then Ansh could spend time with us. We all were busy enjoying the day with this little angel.” Mr. Mehta said affectionately caressing Ansh’s hair and continued.

“It was quite late when we realized that the builder and his goons had surrounded the place and drenched everything in the petrol. The builder walked in and at gun point asked me to sign the property paper. I politely denied but they were not in a mood to hear NO.” Mr. Mehta paused, trying to calm his restless soul before continuing.

“They shot me right in my heart and then set the whole place to fire. Everyone along with this little boy was burnt alive.” Mr. Mehta closed his eyes, leaning back on the bench and continued

“He never got hold of this place cause we never left”

Tears started to roll down everyone’s eyes including Sameer and Yash. The pain of those burnt souls was felt by the father and son. After regaining consciousness from being lost in the sad narrated account, Sameer spoke.

“Did that bastard get punished for what he did?”

“He is a powerful wealthy builder. Back then he had money and muscle power and today he has become more influential and well connected politically than what he was.” Mr. Mehta spoke with a heavy sigh.

“He may be a big tycoon but he will pay for what he has done.” Sameer’s rage was reflected in his words.

“Justice will prevail for you. I assure you.” Those were Sameer’s last words before leaving the park with Yash.

Within the next week, every leading newspaper was screaming about the dreadful event that took place 20 years back sucking up the life of Mr. Mehta and others living with him. And the writer of the article was none other than Sameer.