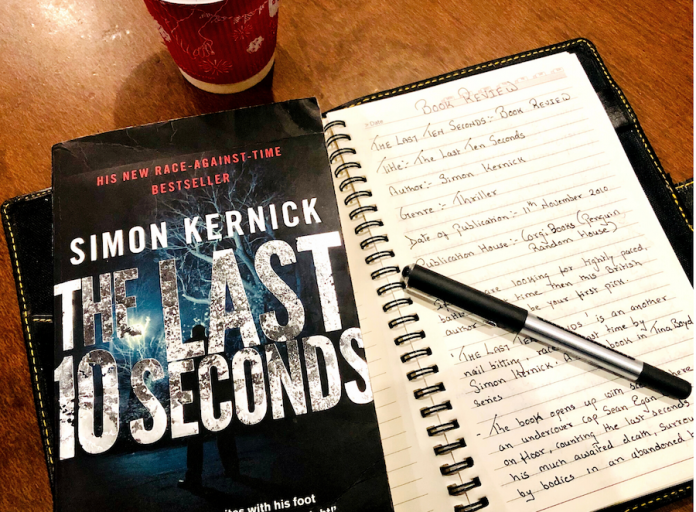 If you are looking for a tightly paced battle against time then this British author should be your first pick. ‘The Last Ten Seconds’ is another nail-biting, race against time by Simon Kernick. The fifth book in the Tina Boyd series.

The book opens up with a scene where an undercover cop Sean Egan is bleeding on the floor, counting the last seconds of his much-awaited death, surrounded by bodies in an abandoned building.

This violent confrontation began 36 hours ago when ‘The Night-Creeper’, a brutal and ruthless psychopath serial killer, who has been terrorising the streets of London for the past two years was finally arrested by DI Tina Boyd.

Though Tina and her team apprehended the serial killer, Andrew Kent, the suspect kept pleading for his innocence in no avail till he recalls that he has a cast-iron alibi for one of the five murders he’s been accused.

Though everything is on point and seemed seamless, Tina felt a tinge of dissatisfaction. Somewhere deep down, she felts that something is off and that she failed to put a pin on it. And Tina will not stop at any cost till she unravels the larger forces in the play.

Sean Egan, an undercover cop, who has infiltrated one of the ugliest gangs which are run by some real bad boys of London. Sean is on a personal mission and somehow finds himself being involved in the abduction of Andrew Kent who is in the police custody and is being escorted to the hospital.

The reason for Sean going on an unsanctioned undercover operation was because of his past. The gang he infiltrated had a hand in his brother’s death some 12 to 15 years ago. Sean joined the gang just for some unfiltered vendetta which leads him in too deep and making him do things he shouldn’t as a cop. Sean is okay with it though and is willing to go far further in the name of vengeance.

Similar to Tina in ethical terms, Sean wants to get to the truth while working on the ground and wants to get rid of the burden of his brother’s death, once and for all.

“Will Andrew Kent be ever retrieved back by Tina to unwind the mysterious death in the serial killing…?”

“Sean is a man on a mission. Will he ever be able to avenge his brother’s death…?”

“Will Tina and Sean ever realise that they are holding the same card from opposite ends…?”

“Is there a deeper conspiracy disguised as a case of serial killings…?”

To know more… Do Read… ‘THE LAST TEN SECONDS”… by… Simon Kernick.

MY OPINION: Simon, as always has successfully delivered another nail-biting thriller, standing with the reputation of best-selling thriller writers in the Kingdom. The book is tightly packed with action and a pile of murders that will make for a good neck workout.

The story proceeds from the eyes of two different people, Sean and Tina. The action and thriller in the book are so impulsive and realistic that it will keep sending chills down your spine, non-stop.

The character building, particularly of Sean and Tina is jaw-dropping. However, with many other side characters, you’ll get a chance to exhale your long-held breath.

A couple of incidents that came with many other characters don’t tangle convincingly. They just add to the page count. It does bother much and won’t be a major hindrance that will stop you from moving ahead with a string of curiosity to know what happens next.

Overall, a really fast-paced, thrilling book which is definitely above any airport reads.