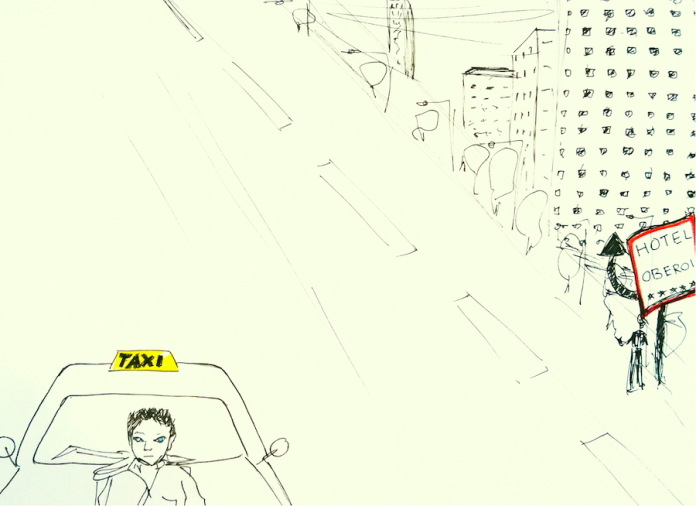 “Oh Lord, please forgive me of all my sins. Be the guiding light of my path and lead me to my destiny.”

Razak was done with his daily namaz, his prayers, he was still on the prayer mat with legs folded behind, near the trunk of his cab. He neatly folded his praying mat and clutching it under his armpit, walked ahead.

Razak, a cab driver was just a next door guy to someone who has not had a keen look. His sea green eyes and the fairly fair complexion along with those blonde hair were placed all flawlessly. A second look at him and you are sure to skip a beat. And if you keep staring at those beautiful eyes and his magical smile… you might fall for him. He could be eye candy for any female if he was ever born in a rich class of society.

Razak sat in his car and closed his eyes taking a deep breath, breathing out his day-long tiredness. It was a long day for him. He leaned back with closed eyes, letting his back, rest for some time on the dashboard, vibrated.

He slowly opened his eyes and leaned forward to read the text. With a poker face, he went through the content of the message and deleted it. He relied more on his razor sharp memory than these stupid gadgets.

Lost his parents in communal riots of 1993 in Mumbai, Razak had spent a greater part of his life in the chawls of Dongri. One of his uncle whom he barely knew was his only family.

Razak had to give up on his education long back when he was too young to understand what game, life is playing with him. He never needed money for his livelihood but his daily food contained a lot of abuse both physically and mentally. His uncles daily quota of alcohol was what had taken away the childhood from Razak. He worked in the textile mill which was always running short of workers. Sometimes, he wished his uncle should die earlier than planned so that he can be free from the daily bashing and abuses. His prayers were answered soon and the drunkard uncle of Razak was in the arms on death, leaving him to himself.

The agony did not end here, the textile mill in which Razak was working was caught under the trap of financial meltdown and went bankrupt. Left with nothing to do, he picked up the job of washing the cabs in the morning before the cabbies began their day.

Razak learned driving and picked up driving. Unlike other cab drivers, he always stayed loner. With no friends to talk to and no addictions to kill his boredom, he was also a god loving person. The faith in Almighty was inherited by him from his hardworking father. Like his father, Razak made sure he scheduled his 5 namaz without fail. Days passed making Razak more and more independent, he was in his late twenties when he bought his first car. This was an important turning point of his life.  Mumbai, a city of dreams, had already taught him a lot many things still. Lost in the crowd and commotion, but with a purpose, crystal clear in his head.

After reading the message, Razak was all set for the last ride before he could call it a day. Driving through the irritating traffic, he reached  Nariman Point. He parked his car opposite to one of the five-star hotel and waited for the passenger to come. He mesmerised us by his skills of drumming on the steering wheel.

Viraj, a wealthy stockbroker, who rose like Phoenix, overnight in the BSE, walked out of the hotel. He was getting mad at someone, while still talking on the phone. Razak was unknowingly watching him from the opposite end.

Viraj lighting his smoke, gestured the taxi. Razak waved back and immediately took U-turn and stopped near Viraj. He was still on the call while he stabbed his half done smoke and got in the cab.

“Kharghar, Sector 79.” Viraj murmured and then continued with his call. Razak nodded and headed in the straight direction. Viraj noticed that Razak has not turned the meter down. Razak was expecting him to say something about it but Viraj was busy on his call.

“Are you aware of your deeds, you s** of a b****. I am gonna make you pay for it. Mind my words… In just a week, I am gonna fuck you all and beat the shit out of you and your people. You all gonna pay for playing those dirty tricks on me.” Viraj was loud enough for Razak to hear everything clearly. Razak kept stealing every glance through his rear view mirror.

Viraj, flushing with anger, ended the call and looked straight ahead. He had already noticed that Razak was listening to his heated convo. Viraj loosened his shirt and exhaled a heavy breath. He pulled out another smoke and glanced at Razak. Razak nodded and rolled down all four glasses as Viraj lit his smoke.

“You have not turned the meter down? I am not gonna pay you anything extra.” Viraj smiled and took a long drag of his smoke.

“That’s fine sir. You can pay whatever you feel like. This is the last ride of the day for me.” Razak smiled and replied politely.

“What’s your name?” Viraj was quite surprised by Razak’s reply. Cabbies in Mumbai are never the free ride givers.

“Razak…” He replied and looked in the rear view mirror to see the expressions of Viraj. There was nothing surprising.

“So is it that you offer a free ride every night?” Viraj was drifting from his foul mood. He was kind of enjoying this company of a stranger.

“Yup…” The replies from Razak were short. They drove in silence till Razak spoke.

“Sir, can I ask you something?” Razak didn’t want the conversation go cold.

“Yup…” Viraj tossed away his smoke and popped mints.

“Are you dealing in the stock market?” Razak asked keeping his eyes focused on the road.

“Ya, and how did you figure it out. I doubt on your schooling and college too…” Viraj was now surprised with this question.

“Ya, I have barely studied few grades from a government school, now it’s all about this cab n me…” Razak softly tapped the dashboard of the cab and continued.

“This cab taught me a lot and passengers are my best teachers.”

“Sir, can we take a small detour. I need to return a favour to someone.” Razak asked as they were heading on the highway.

Viraj, who was now much relaxed after a small conversation, didn’t mind it. After few kilometers, Razak took a left from the main road. With no naked light to be spotted, Viraj was trying to figure out which area it was. He tried to ask Razak about it but didn’t get any clear answer. Finally, the cab came to a halt.

“Just few mins sir, I’ll be right back.” Razak smiled and stepped out of the car. Viraj who was now relaxed felt a pang of the strange fear. He was watching Razak who opened the trunk and pulled out a heavy gunny bag. Loading it on his back, Razak started walking in dark and disappeared in seconds.

Anxiety was taking troll over him. He stepped out of the cab. The cool breeze was refreshing. He took few deep breaths and closed his eyes. A strange sweet smell hit his nostrils immediately. He opened his eyes and scanned for the source of the smell.

Viraj walked to the trunk and the smell grew stronger. Out of curiosity, he opened the trunk and sweet smell of perfume hit him hard. Everything was too dark to figure out what was within. He fished out his cell phone and turned on the torch to have a look inside the smelly, empty trunk. The light hit a spot which was wet and fresh. Viraj touched it and brought it close to his eyes.

He was shocked to see his fingers stained with blood. Aghast, Viraj took few steps back. He was about to turn to look where Razak is when a voice came from behind.

“You should have waited inside. I went to make space for the pieces of your body.” Before Viraj could react, a sharp sashimi knife pierced right through his intestine.

Viraj was shocked and looked at the frozen eyes of Razak which bore no answers to the last questions of Viraj. The bird of life was set free and Viraj was on the floor in the pool of blood with eyes wide opened.

Razak pulled the body to the other side, down the road and under the cover of his cab, started chopping it into small pieces. Not for a single time, Razak’s eyes revealed any feelings.

“You should have listened to your partner. They are ahead of you in taking decisions.” Razak murmured as he chopped Viraj’s body.

He now managed to fill the gunny bag with those chopped pieces and shifted it in the trunk. He used a fresh fragrance to shift the attention. He cleaned the knife and his hands and spread the prayer mat near the trunk where Viraj’s body was lying moments ago.

“Oh Lord, please forgive me for all of my sins. Be the guiding light on my path and take me to my destiny.”