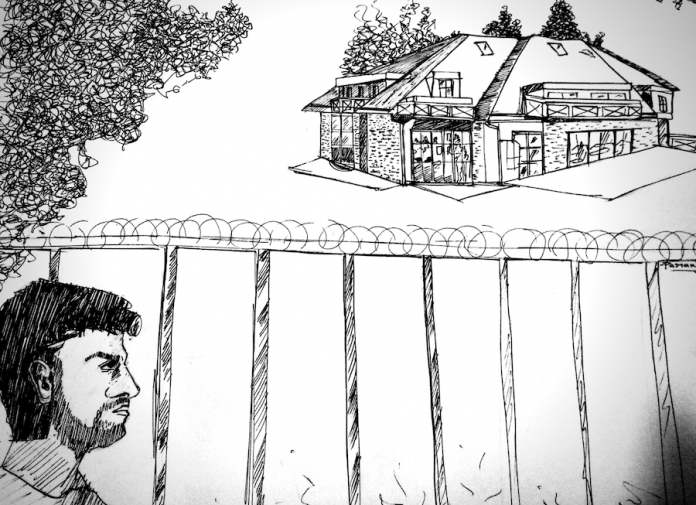 David had been tracking Stacy’s movements and list of the other people visiting the house. No one had come into the house, except her and time being maids for the morning. She went out for night parties. She was a lonely soul, who lived her life to fullest without any burden of attachments, bondages and responsibilities or relationship issues.

He could not risk asking anyone and everyone casually, like an inquisitive curious tourist eager to know about the people and places. His features betrayed him, they outdid the normal caricature of a tourist. He was very stealthy in his moments, keeping as low as possible.

In his lifetime, he had committed many burglaries without getting busted. Over time, he always worked solo. A partner meant a share of the pie and you need to back him which he may or may not do for you. It would be a loop for leakage hence David always worked solo.

He had once made a mistake of taking a partner in for a job. A partner named Maria. The incident that he could never forget in his life. They were not busted but the house they had broken into belonged to a well-known mafia thug. David’s recce proved wrong the night they broke in. The thugs were in the house and caught David and Maria. The house had turned into a battlefield grimacing rounds gunfire continued for a while. Ultimately Maria and David ended up getting caught.

The thugs tied up David and Maria and tortured them. Maria was raped hour after hour by the gang members. At the end of the third day, David managed to free themselves but they caught Maria and slaughtered her. David kept staring at the rueful sight. Tears escaping his eyes, inaudible sobs and choked up inaudible words escaping his lips. All this while he had been hiding a few feet away. He could not muster up the courage to do anything.

Maria kept looking in his direction. She wanted him to come and save her but David didn’t. He stayed stoned in his place watching the gang members slaughtering Maria’s naked body into pieces of flesh.

Though he couldn’t hear what Maria was trying to speak, he could read her lips. Her eyes flushed with anger and a feeling of betrayal for David.

“You left me alone, but I’ll never leave you.” Her eyes closed and still, the thugs kept slaughtering her. Tears rolled down David’s eyes but he could do anything.

From that day onwards, David worked solo. It had been years after that incident, the memories of those days still haunted him day and night alike.

From his three weeks recce, he knew that the woman inside the house has no need to do anything for living as she floated on an ocean of cash with no legacy to be left behind. Everything she inherited was still a mystery. The house which had been under David’s surveillance was also located in such an area where every nearest neighbour lived miles away.

Stacy’s house was spread out on thousands of square feet. It was a villa, one of its kind. The interiors blurted out loudly ‘nothing ordinary in taste’. Thus David had been tempted to a great extent to make it his last target, as of now.

David packed his duffel carefully and drove back. He had planned to break into the house the next day. After the sun bid everyone goodbye, Stacy will be out for her party night. David had checked the security system, the best in its class but it was no match to his skills, only he could breach it. After all, he was quite gifted with skill at par which had no match and with all the unique toys he had in his duffel. He could even break through the world’s most secure places.

David reached the highway motel, where he had rented a room at a very cheaper rate. The reason for such choices was, the motel lacked the basic surveillance and had no frequent guests. The staff too hardly comprised three people with no kitchen setup. It was perfect for the wanderlust backpackers.

He walked into his room, dimly lit with the only light in the room. He took a quick shower and kept his sandwiches, he had picked on the way, in micro and pulled out a can of beer from the refrigerator in the room.

He took a sip of beer and a bite of sandwich and sat on the cranky bed. His mind humming with the plan of action for the following day. Though he had worked out every inch of his plan over and over again, he felt he still needed some more time. He wanted to be sure for one more last time.

He lit his cigar and walked to the only window in the room. The winter had turned harsh and snow was inevitable. He smiled, the season would keep the people halt back wherever they were. No one to look around or peep out to see what’s going on in their neighbourhood.

He stayed on his bed, staring at the ceiling. Memories of Maria kept coming back to him as he closed his eyes. He woke up, sweating like a dog before the dawn break. He walked into the bathroom and turned on the hot shower to rinse his memories down the sink.

David got up early that morning and continued his routine. Till noon, he appeared to be an aged tourist enjoying his retired life to anyone and everyone who crossed his path. He checked out from the motel early that evening and reached his destination.

He stayed in his truck, parked behind thick bushes, away from the main road to avoid any suspicion. He had planned his exit very well so that he could not be traced, like always.

David had studied the security system of the house. It was one of the best where no guards would be needed. Digital lock panel and pressure sensors. A single wrong move and all the cops in the area would be flooding the house in three minutes. However, David too was best in his class. He had bypassed much higher securities without tripping any of them.

David was now waiting for Stacy to go out and it would be a cakewalk for him. His schedule had been somehow interrupted by snow. He had been watching through the scope but he had yet not spotted her inside. Maybe she had already left early or she had not yet returned from last night’s party.

After taking the last surveillance of the surroundings, David stepped out of the car. He had covered his shoes with latex booties to avoid the prints and so his hands covered with latex gloves. He never trusted fibers as it could leave a trace and it could be traced with DNA profiling, straight to him.

He picked the right side of the house to step in the compound from the thick bushes to avoid the main gate of heavy metal guarded by the surveillance camera. He was very careful once he passed the fence of the compound, keeping his eyes at every possible corner. Avoiding himself from being spotted. He hid behind a small bush, the low light gave him the perfect cover.

Once sure that nobody was watching him he crouched slowly to the main door and plugged the device into the digital lock panel on the door. The number started running down and the device finally showed the code to unlock the door.

He closed the door behind and disabled the security system and pressure sensors. He inhaled the fresh air deeply and looked around. The house as expected was dark with no lights on. He smiled as his prediction about Stacy had been impeccable. She had not returned from the previous night’s party. He pulled out the penlight and illuminated the living area.

A lavish palace would be a no match for the interior of the house, it had antique showpieces and many canvases from famous artists. The light from David’s pen torch hit the crystal piece on the tea table surrounded by the leather sofas. He bent down to have a closer look. A single pieced mermaid ashtray. He was desperate to touch it, but it was of no value to him. His rule was simple, whatever he touched he would take it. He walked past the dining area and to the stairs on the left leading up.

David was as stealthy as possible in his moves and walked up with his one hand holding the penlight and another touching his KA-BAR knife tucked in his waistband. His colt was strapped to his ankle. It was David’s last weapon of choice by as guns’ always made a sound no matter how good a suppressor you have on the muzzle.

And then, he heard the sound. Every nerve in his body stretched and alert. He walked at the door of the room from where the sound had come. A bead of sweat rolled down his neck through his jawline. He could see the light from the bottom of the door, someone was definitely inside. He pressed his ear over the door to get a clean earshot. All he could hear was some sound but couldn’t make out what it was. After a while, the sound stopped and someone was humming sweetly inside.

For a moment, a thought crossed David’s mind to run back and leave the place but something within him held him back. He took a deep breath and looked at the other rooms which were locked. Pricking the lock of doorknob may make some sound and that could alert anyone inside, probably Stacy, if she was in the room.

David unstrapped his colt and pulled it out. It was not to fire but to scare whoever was inside. Holding his gun tightly in one hand with a safety lock on, the fingers of the other hand slid over the doorknob and wrapped across it. He softly turned the knob to avoid possible click sound and walked in.

What he saw was unlike any terrible shock, he had had in his life. He did not see Stacy but Maria, lying naked on the bed, pooled in blood. Her limbs scattered on the bed and under her on the bed was the jewellery and the dollars stained in her blood.

Maria’s head turned to him and smiled. The head rose from the bed in the air and came face to face. David was stoned.

“I told you, I won’t leave you. I have been waiting for you for many years.” Maria’s head smiled. Her smile turned into laughter, rattling the walls of the house. The colt fell from his hand and he tightly closed his ears and shut his eyes.

The slaughtered body of David was found in his truck after two days. The parts of his body served the feast to dogs and flies. State police ran down every possible check on what had happened and how it happened.There was no house nearby, the house in which David had gone in and met Maria.