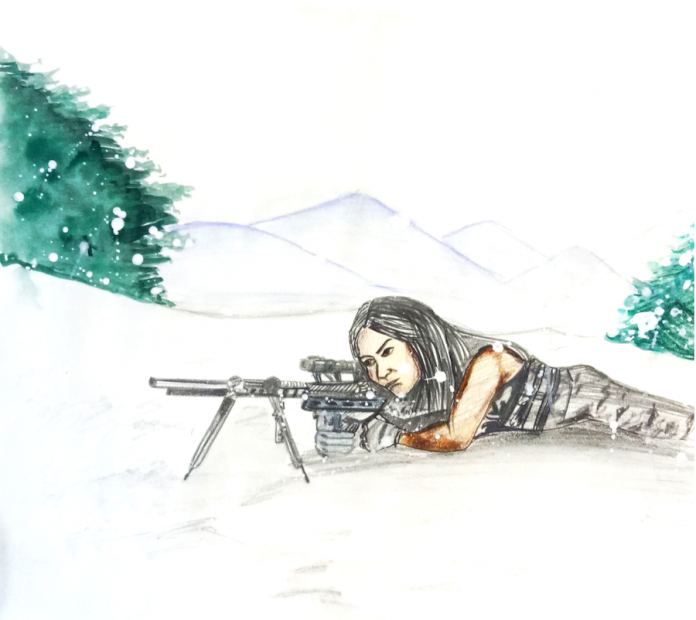 Among those beads of sweat lined up on her forehead, one rolled down from her temple and travelled through her jawline. She didn’t move a bit to wipe it off. She was rock steady, like a pile of woods frozen under snow. Siberian chilling winds couldn’t be harsher at this time of the year. It still didn’t bother her. Sara had been trained for worse climates and field conditions. All her focus was on a man more than a mile away, the one for whom she was here today.

Sara had single-handedly finished many clandestine missions for her agency, Metsada, a Special Operations Division which is responsible for sabotage, paramilitary operations, and assassination. It was the most reliable department of Mossad and Sara was the best trained MACHINE for them, a killer machine.

But today was different, there were no direct orders from her handlers. This was something out of her work orders. This was personal and she cannot fail in any of her attempts. Unlike other missions, there was no official aid. Only Ahmed was her spotter with limited evacuation plan. But there was nothing that mattered Sara. She was ruthlessly trained to become a lethal killing machine. In any inhuman conditions, she brought her targets down without any trail left behind. But those situations were strategically planned by mentors and handlers of Sara and they always made sure that she was affirmed by strong backup and evacuation plans.

Before pulling the trigger, Sara had always calmed every nerve of her body. Her emotions about right or wrong were bottled before going on mission. Emotions in the covert mission are likely to endanger it and might land her into a deep shit where her country will disown her and she’ll be lost then. She had nothing to worry about anything today, as this was personal.

There were no lights in her room because there was no room. She was lying still on the glaciated mountain under the night sky. The ice was numbing her body and that was perfectly fine for her. The only thing she wanted highly active was her those set of fingers which were needed to caress her AWM L115A3 sniper rifle, one of the best in class for accurate long-range shots. The customised night scope for the long range was fitted over company fitted day telescopic sights. A mag of .338 Lapua Magnum rounds chambered and cocked. Her headset was all OK and checked.

“This is Alpha one.” She replied. Her voice was curt yet crisp.

“Target location eighteen hundred meters east. Third floor of the warehouse, fifth window over from the right. Can you see the target?” Ahmed gave a precise location. He was getting all the details about the plot supplied by satcom.

“Copy that. Locked and cocked.” The safety lock turned off now and her finger still at the trigger.

“All factors dialled in on scope. Frequency shifting suppressor tuned with no optic reflects. Good to go.” Sara replied adjusting her scope. Every parameter, the winds, the atmosphere, the target distance, the Coriolis effect, everything was accounted by her.

“Wait for the orders.” Ahmed spoke, turning himself silent and holding his breath back.

The reason for Sara to be here was that unfateful night when her world, her family, was all shattered out and turned to lifeless bodies in those attacks of 26/11 at Nariman house in Mumbai, India.

Ethan, Sara’s dad, worked for the software company in Israel. Ethan was working here for two years, two years without a single day off, all for the new system setup. He deserved a much-needed break now and so did his family.

Ethan had already promised his family to take them to India for their next vacation and it was the perfect time for that. They had plans to visit Delhi and from there they wanted to have a look at the wonderful monument of love The Tajmahal. How can one not visit Mumbai when in India? Thus they decided to visit Mumbai last and then board back from there.

The busy roads and the sweaty days had left this family from Israel drained, all they could see was the bed towards the end of the day. They were all back and were relaxing in their own rooms thinking about the different places they had visited during their stay there.

Sarah was moving around in the streets nearby, absorbing the essence of Mumbai. She would have hardly crossed the next lane to Nariman house when a loud sound of destruction hit her. A huge explosion rattled the window panes of the buildings nearby. The gas station next to Nariman house was spreading the violent flames and torching anything that came in its way.

Ethan, along with Aida and Rachel, Sara’s mother and younger sister rushed to look out through the shattered glass window. The next moment they peeked out of the window, a volley of rounds from AK 47 rammed in, killing people mercilessly.

Sarah wanted to rush to her guest house on hearing the explosion, but a hand grabbed her from behind and covering her mouth, pulled Sara into a building still under construction with no lights around.

“Sssshh… Don’t go there crazy head, it’s an attack, a terrorist attack.” A heavy voice whispered into her ears. He was Ahmed, another Jewish from Nariman house who was alone and like Sara, was out for the walk. Sara’s eyes froze at these words of Ahmed. He softly nodded, gesturing her to stay quiet.

The attack and counter attack by security agencies was like a never ending battle. Ahmed and Sara stayed where they were till the next dawn. The battle lasted for more than 36 hours. It took a long time for the security agencies to get hold of the situation, now the herculean task of getting the bodies began.

It was something that no one had ever thought of, hell broke loose when she saw her happy family turned into corpses and ashes. She never thought that this would be the last holiday of her with family. Ahmed, who was also Israeli moaned the death of his countrymen silently. He saw that Sara had no family now.

“I have no words to console your loses. ” Taking a deep breath, he spoke to Sara who was staring cluelessly at the burnt remains of her family. All Ahmed could see in here was the rage, the fury, the hungry anger which would suffice only once she was able to justify her birth.

“I will avenge your death. I promise you Dad.”

“I can feel the pain you going through at this moment Sara, Gods great…All I can say is you not alone, I’ll be your family if you say so.” Ahmed kept his hand on her head.

Soon they flew back to their own motherland, the papers to her adoption were filed and soon Sara became his legal child. Sara was just 15 when all this took place. Ahmed like a father adopted not only her but also each need of her’s, be it emotional or rational.

With no clue of what Ahmed did, where did the funds raise, how where the expenses born, Sara grew up. She with her passion and a promise of revenge entered Military School and came out with flying colors. It was today that the questions which were wandering in the small head of Sara came out one after other. Finally, Ahmed revealed the biggest truth of his life to Sara, about what he was doing, who he was working for. He was in the top brass of Mossad, working for Metsada.

Under his indirect supervision, Sara was trained to those levels which generally are not meant for females. She was the only female in her batch who outnumbered every male in her training troop and that’s why it was easy for Ahmed to pull her in Metsada as a field agent. She was a priceless asset for Metsada. She was impeccable in any mission assigned to her, be it Gaza Strip conflict or nuclear secret operation in Iran.

But the mission on which Sara was today, in Russia, was not classified and not backed by her agency as it was not in the records of the Agency. Sara was officially on leave. She finished her last mission in Syria and was on a break now. It was this time which she desperately wanted to use for the mission which she had been living for. She was on her mission with no one but Ahmed by her aid, that too unofficially.

The mastermind behind the attacks of 29/11 was though known by the world now but the real faces were yet to be unveiled.

Ahmed had provided her the details of the meeting of those masterminds in Russia, a week before. She within the next 24 hours, was at her destination and finally at her sniper’s nest.

“Target in the blue suit with a white shirt. Standing at left to the table. Take him down anytime.” Ahmed’s voice crackled again.

“Roger that.” Sara took a deep breath and calmed every nerve in her body. Matching all parameters, she pulled the trigger. After 5 seconds, the voice again crackled in her ear.

“Target down. Chopper down in ten.”

Sara’s supple fingers disassembled sniper rifle and she was back to the point. Soon, the chopper came and she got in with Ahmed inside, waiting for her with a smile.

Back in Israel, they were standing in front of her family picture with a shot of Jack in their hand.

“To the family.” Sara said.

“To the family.” Ahmed parroted.

“I didn’t get you, I mean why did you support me so much?” Sara asked with a cold voice.

“There’s one more thing that you still don’t know about me Sara…” Ahmed paused taking a long breath.

“Ethan, Ethan was my elder brother…”