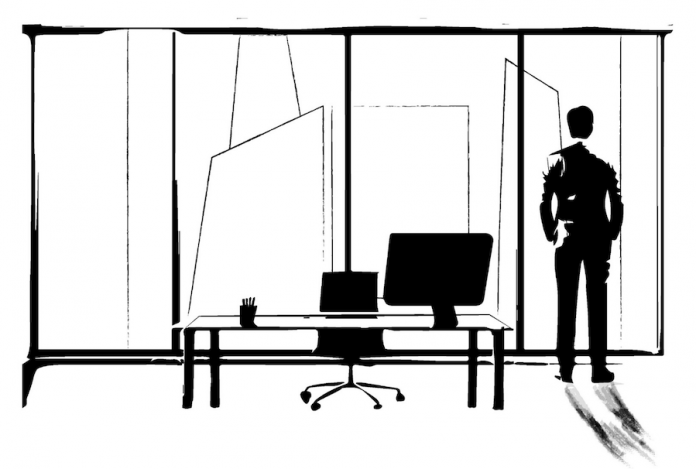 “Sir, Mr. Tyagi has arrived.” Aayesha opened the glass door of her boss’s chamber and informed. The office was one of its kind, owned by one of the billionaire businessmen of the state.

“Send him in and send some coffee.” Shiven was going through the file. He closed it and smiled at Aayesha.

“On time, like every time.” Shiven smiled and shook hands with Tyagi.

“Don’t tell me that you have called me to file bankruptcy today.” Tyagi settled in his chair and looked straight into Shiven’s eyes. Shiven smiled and passed the file quietly, he had been reading, to Tyagi.

Shiven and Tyagi had been school friends. Both belonged to the lower-middle-class family and had made their fortune together. They had been thick with each other in their days of struggle when life had tried hard to kick the shit out of them. Both stood together, rock solid only to become unstoppable.

Shiven went far ahead, while Tyagi was content with his law practice. Tyagi was one of the best lawyers when it came to corporate compliance. He was even the legal advisor of Shiven’s business empire, Mishka Group of Industries Pvt Ltd.

This multi-million dollars’ company on standing the sole shoulders of Shiven. Till today, he had no partners in any of his businesses. He never trusted any, though he had once offered Tyagi to be his partner in the already set business. Tyagi had politely declined the offer, he was happy with his own work.

“What the F****? I thought you got burned out in the last deal you went for, against my opinion.” Tyagi was visibly surprised by the figures he just saw in the file.

“I told you, this deal would be another goose with golden eggs.” Shiven winked at Tyagi and leaned back in his chair.

“But it was a big risk, Shiven. If the things hadn’t worked out, which actually did, you would have ruined your empire.” Tyagi taking a deep breath snapped the file and pushed it back to Shiven.

“Without taking the risk, you lose everything.” Shiven smiled and lit his Cuban cigar. The coffee arrived and they both waited for Aayesha to leave.

Shiven walked to the other corner of the office and pulled out another file from the wall mounted safe, well hidden behind the famous painting of M. F. Hussain. Taking a deep breath, he gave it to Tyagi. Shiven didn’t utter a word and walked to the glass wall of his office on the left. He could see the whole city from the highest floor of his office.

“What’s this?” The title of the file was CONFIDENTIAL. Shiven didn’t reply and kept smoking his cigar and looked down as dusky rays of sun slowly transformed the cities beauty into that of something dreary and fearful.

Tyagi went through it. He could not believe what he was looking at. It was more shocking than the previous file he studied. His eyes nearly popped out of his eye sockets. Tyagi closed his eyes and took a deep breath to calm his nerves. He lit his cigarette, walked to Shiven and stood next to him.

Both friends kept smoking in silence for a while, looking at the buzzing city of the country. They had both come to this city with nothing in their pockets. And now, there would be hardly anything they couldn’t fill their pockets with.

“Is it because of the threats you had been getting for the past two months?” Tyagi asked nervously. He knew that Shiven was steel bone, such threats in business could never bug him an inch.

“You think so?” Shiven asked blowing the smoke on the glass. His gaze still fixated straight ahead.

“But then, why do you want to do this now? You are just 50 and this empire was your dream, your passion… Isn’t it?” Tyagi for the first time was not able to fathom what was going on in Shiven’s mind.

“I know, my destiny, it’s inevitable. I don’t want to keep it waiting. I have been working so hard for it.” Shiven replied and took the long drag of his cigar. Tyagi was quiet aware that Shiven would do what he had decided. No one could stop him or get in his way.

“Mishka will be taking charge of business from tomorrow. I’ll be helping her out in handing over my legacy.” Shiven and Tyagi walked back to their chairs and stabbed their smokes.

“It’s her birthday tomorrow. She will be 21. I still remember that day when I laid my eyes on her, cuddled in your hands in the hospital.” A smile on Tyagi’s face appeared as he recalled the memories of the day when Mishka was born to Shiven and Hetal.

“And this would be the best birthday gift for her.” Shiven smiled.

“And what about Hetal?” Tyagi asked about Shiven’s wife.

“She too has a role to play, being a mentor to Mishka.” Shiven was lost in his thoughts. He sipped his coffee and continued.

“Tyagi, you are the only one I have ever trusted in my life. Promise me you will be the guardian angel of my daughter.” Shiven’s eyes had a pleading urge.

“She is our daughter. I’ll always be more available to her than I have ever been to you.” Tyagi smiled and took both the files and was about to leave.

“And what you’ll do after Mishka has taken the complete charge of your empire?” Tyagi asked knowing that Shiven would not spill the beans.

“Good day Tyagi, you have a long day ahead of you. So better get to work” Shiven smiled. Tyagi left nodding his head sideways. Only God knew, what Shiven was up to.

Shiven’s family had his Mom, his wife, Hetal and his daughter Mishka. Shiven’s Dad had passed away during the struggling phase of his life. Though Shiven never revealed, he always missed his father more than anything in the world and with every passing second his yearning for his father increased to a great extent. For the rest of the day, Shiven stayed in the office. It was evening time when Aayesha reappeared.

“Sir…” Before Aayesha could complete, Shiven asked her to send those people in.

He had asked for the delivery of Porsche Panamera for his daughter. He talked with them briefly and then transferred the payment. Mishka had always wished to drive Porsche and Shiven knew it very well.

Next day, Shiven, along with his family drove to the office in the brand-new Porsche Panamera. Neither Hetal nor Mishka knew why they were going to Shiven’s office.

Tyagi was already present with the legal documents. Once they were all settled in Shiven’s office, Tyagi read out the Shiven’s WILL. Everyone congratulated Mishka and everyone was even surprised about the turn of events but no one dared to question Shiven’s intentions.

The routine continued for Shiven. With Mishka coming to the office, she took full charge of the whole empire. Every legal document was being crafted very carefully to avoid any future discrepancies.

It was weekend and Mishka was done with her work. She walked to the study room where Shiven was going through some official documents. “Shall we leave for home, Dad?”

“I have something to finish, You carry on, I’ll be late.” Shiven replied stretching his body and taking a deep breath lit his cigar.

“Come soon, Dad.” Mishka walked to him and took the cigar away. She had always been against his smoking habit.

“I’ll. Take care of everyone at home, darling. I love you a lot.” Shiven hugged her tightly and walked back to his desk. Mishka felt that something was off about the way he behaved but she too, like others, didn’t dare to question Shiven.

Slowly, the office staff also started to leave. Shiven was last to leave the office with night duty security guards staying behind.

It was past midnight but Shiven hadn’t returned home. Mishka along with Hetal and her Granny was quite tensed. Shiven was very particular about his timings and if there was any change he would have definitely informed.