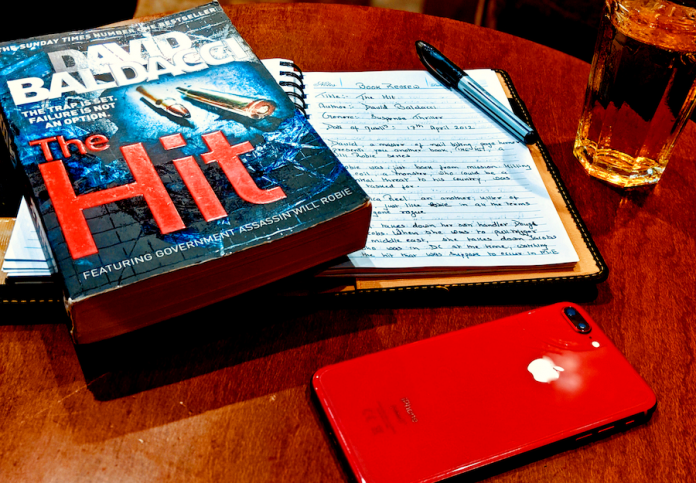 David Baldacci, a master of nail biting, page turner, present you another book, THE HIT from the Will Robie series.

Robie is just back from his mission. Killing the evil, a monster, who could be a potential threat to his country, was he tasked for. Robie is the best the agency has, an impeccable and a perfect marksman.

Jessica Reel, another killing machine of agency and equal in all terms like Robie, has gone rogue.

Reel takes down her own handler, Doug Jacobs. She was supposed to pull a trigger in the Middle East on one of the wannabe and Jacobs was watching all on his sat com sitting in his office in DC. What Jacobs didn’t know was, Jessica was in DC and the trigger she pulled was for him.

Jessica has a list, a list of men that should go down, in her own agency. The purpose known only to her. Robie is assigned to track down Reel and stop her at any cost before she proceeds with her kill list. A killer is sent behind the killer.

Robie knew Jessica very well and how impeccable she is, a kind of his female version. They had been together on a few missions in the long past but that didn’t change anything.

Robie, a very deadly opened now for Jessica, is on the hunt. His ingrained training dictates he just follows orders without twitching his moral compass. But Robie cannot ignore all the clues, strongly pointing that there is something wrong in his own agency.

As they try to take each other out, Robie discovers that Jessica is on a mission with a purpose. She had definitely turned against but not the whole agency and some within the high ranks of the agency.

When Jessica saves Robie in an ambush, he takes to his gut and goes with his instincts. Robie goes off the grid with only one man knowing, whom he trusts more than his life, The Blue Man.

Tracking down Jessica with the hints she left behind that can be cracked by Robie, he finds her out.

What was the purpose that turned Jessica against her own agency?

Will Robie ever be able to find that, whether Jessica has turned Rogue or not?

Will they team up to fight the evil or kill each other?

To find it out, read a definite page turner… THE HIT by David Baldacci.

MY OPINION : The book is definitely a page turner and truly unputdownable if you don’t think much about the small trails that are left unexplained.

The pace of book is fast and keeps moving with a higher magnitude. The only thing I felt was a weak plot though. David has tried his best not to give anything that will let you predict the conclusion. Well, it didn’t work out that much this time as I could predict the climax after two-third of book.

Another thing I felt was dull character development. Action is overwhelming motivation and there aren’t a lot of nuances.The book promises a fast pace, adrenaline rushing events and it is definitely a page turner.