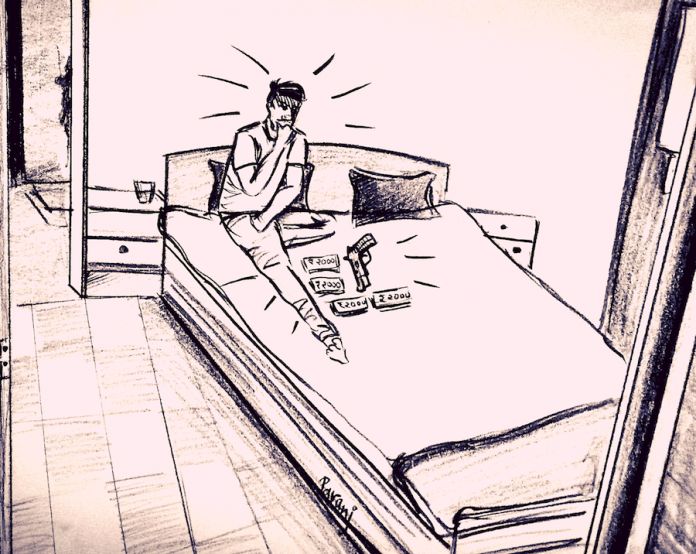 It was a dark night of monsoon. A smell of wet soil was still fresh in the air and the sound of crickets was killing the silence of the night. He was sitting on his bed leaning his back on the wall behind with his backpack clutched tightly in his hands, resting on his lap. A faint street light was dimly illuminating his room from the balcony. He was alone in his room, upstairs and the only other member in the home was his mom, sleeping peacefully yet in a disturbed state in another room downstairs.

The heavy rains had cooled down the weather but the fire within him was red hot. With beads of sweat lining his forehead, slowly rolled down to his jawline. His right hand was inside his bag holding the gun tightly. He got it from Wasim, a stranger he met today in the evening. He never knew that saving Wasim unknowingly from cops in a routine night patrol will get him a gun he desperately needed.

He told Wasim what he was going through and how badly he wished to have a gun for a day to kill one MOTHER F****R who is messing up his life.

Wasim, a contract killer, didn’t ask him why he needs a gun. After all, he was just a student of M.Sc. What would have happened that he needed a gun?

He, himself briefed Wasim about issues related to admission and donations.

The whole night he sat on his bed holding the gun inside his bag. His mind was pacing like a wolf who was injured and bleeding. Thoughts of what will happen if he uses the gun tomorrow kept clouding his mind.

What will be his future?
Where will he land?

Just one round fired from the gun will change his whole life. From an upcoming potential science student to a murderer, he will end up either in jail or maybe as a wanted criminal.

He wanted to kill that person who tortured his self-esteem and his need. He never had an idea as to what this young blood was going through, he was not ready to understand his financial conditions and that paying the donation for his seat in master degree was a difficult shot. He arranged some money by himself without bothering his parents, but that was just half of what was asked. And if he won’t be able to deposit the donation money by tomorrow then his admission would be cancelled.

He had already lost two years of his life and the cause was the previous institute from where he completed his master’s as Gold Medallist which turned out to be fake university and now denotified. Degree from that university was now just a piece of paper which has no value and no recognition.

His friends who studied from other universities have already completed the master’s and were now on the job hunt. And he was trying to get the admission back in another university whose certificate will be of some value in his resume.

Two years already wasted and now if he won’t get admission it will end his dream to get the master degree and thus his career would be a scrap which won’t be as promising as was dreamt by his family.

“No, I can’t let this happen, my career cannot end like this, I have to get my masters done by hook or by crook.” He kept saying to himself.

He has kept his love life too at stake. She was the one who always loved him more than he can ever imagine. But the two years’ fiasco had made her change her mind for him.

“You could not prove yourself. And this way, you’ll never be able to prove yourself ever in your life.” Her last words kept echoing in his ears like the cannons.

His temples were throbbing like hell, giving him the worse headache. He placed the cash and the gun on the bed and kept looking at it. He took the gun and turned the safety lock off.

“Once and for all, I will end all the worries.” He placed the barrel of the gun under his chin and pulled the hammer back and closed his eyes. His trembling finger was now on the trigger.

The face of his MOM and DAD appeared in front of him crying over his corpse. The memories of his life started flashing in front of him. From a fun loving easy going boy, who has stood bravely against every challenge of his life is now about to end his life this way.

Tears started rolling down his pale lifeless eyes. His mom was the one he could do anything for and can pass through any hell that too just to make her smile.

He kept the gun still intact and cried like a baby. He cannot kill himself for the sake of his parents. They have done a lot for him and now he cannot do this to make them suffer anymore. He glanced at the heap of money on the bed. It was still the same amount, half of what he was asked to pay for donation.

A sudden rage of anger shot up his head. He wiped his tears and decided to punish that one person who was the reason for all these.

“Yes, I will kill him if he refuses tomorrow.” He eased the hammer and locked the gun and kept it back in his bag along with money.

The dawn was about to break and so was his wait. He got up from the bed and got ready to leave for college. Before leaving he just said to his mom.

“Mom, maybe, it would be a long day for me at college, so if I am late for lunch, don’t wait for me. I will have it once I am back…”

He kissed Mom’s forehead and hugged her tightly for the last time.