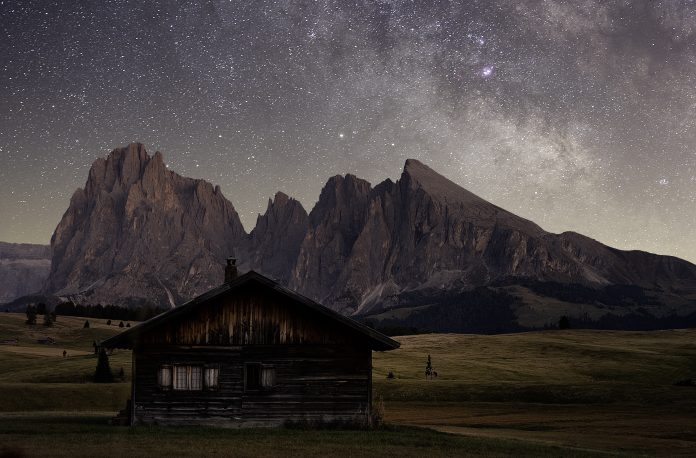 I felt a great burden on my chest. My heart is already weak by birth, as the doctors had diagnosed back in 1986. But it shows symptoms that it gets weaker at such instances. The magnificent sky with glimmering stars dotted all over was charging towards me. It was coated with black and white patterns. I felt I would be buried under it or would be lost or absorbed in its hugeness.

But like a little creature afraid of the bigger one fighting the emerging inimitable crisis, I too hid behind the wall of a country house. Still, the sky was advancing further or I thought so, there was no noise. The place was quiet as much as it could be. Nothing moved but the aerial geography.

I had my left ear affixed to the wall. I got my ears off. I heard the footsteps falling hard and in quick repetition from a distance. I knew they were footsteps of more than one human and not of a running cattle. They were lighter than a fore-footed creature. There was also some exchange of words less understood at first, but in a few moments, our distance shortened. The footfalls became vibrant and pronounced, the talk comprehensible.

The stillness of the night was breaking slowly. I turned around and saw two pairs of feet in the shadow seen through blurriness. Their faces were still in the dark. Their pace began to be slow purposely. They spoke my language. I deciphered that they were in search of someone. There was a wall that separated us. If I stayed low or sat down or squat, I could restrain them from seeing me. The wall was very small but a separating construction was for sure between them and me.

I took a step back. My back touched that wall. It was ingrained with little stones on a brownish texture. I pressed myself hard and started lowering towards the earth. In the rush, I scratched my back against the stony wall. In the fear, I did not realize I was pushing against the wall so hard. I maintained to keep myself away from their side.

They were now at the wall. One seemed monetarily superior to the other. His face was clean and shaved, shining beautifully in the moonbeam. He had put on a black coat under a white shirt. He was panting. It seemed, he was not well versed with the art of running. He knelt and again brought himself up. He repeated it several times. He then put his hands on his chest and looked at the sky.

Meanwhile, I had forgotten the sky and its danger. The other fellow seemed stronger and had a bottle and a suitcase in his hand. He offered water to the one in the black suit. It seemed he was used to running. He was not fighting for breath. Running has not invited any exertion attributes on his face. His outfits were simple, a sweaty t-shirt. He was carrying an attache in his other hand. The man in the suit hastily drank the water and returned the bottle to his sidekick. His eyes were searching, though there was nothing to see in the moonbeam.

It was mostly trees and then a dusty road across me which led into the dense forest. I did not know what was behind me until a honk of a horn and then another. The horn broke the silence and I was afraid to see who it was. I moved a few steps to my left and a couple more. I got my hand out of the edge of the wall to see a big long car of which the door opened hurriedly and a teenager ran past me lightning fast and headed through the clearing towards the dense forest.

To catch him, a man in a sweaty t-shirt flung his bottle and a bag over the wall behind the boy. Behind him, was the man in a black suit. He could not jump the wall so elegantly like his man. He stumbled and fell. The teen’s strides were short. He managed to enter the dark forest. The chase was on.

I heard a loud sneeze and then something falling hard on dry leaves. And then a loud cry. Few birds were disturbed by the scene and the chaos. They shrieked and some flew away. I ran to see what became of the chase. The sweaty man had collared the teen when he emerged in the clearing. I was right across them standing aghast. My eyes went straight into the eyes of that man. It was the moon’s shadow that hit its target. In the clearing, it was brighter. I felt dry mouth and sweaty palms and a great stroke of numbness penetrated all over me. I saw the bleeding scalp of the teen. He could not speak. There was a champion’s smile on the man’s face. Suddenly someone held my neck tight. The pain almost stifled my breath. I turned around and what I saw was the man in a black suit.

I was blindfolded and my hands were tied behind me. Someone recklessly opened the blindfold but my hands remained behind. I opened my eyes slowly. I was seated on a bench and on my left that boy in a similar fashion as mine, blindfolded. Beneath it, he was bandaged and from a couple of places blood tickled down, his cheeks were frozen.

The room was dark except for a low lit yellow lamp that suspended from the top. It hung between us and the man in Khaki sitting across. He had a thick moustache, heavy red eyes, stubble, and a scar on his left cheek. He wore a cap with some logo. I could not identify what it was for two reasons; it was not that bright enough to see things in details and I was not able to focus as I had completely run out of my energy.

The officer started interrogating me. I humbly replied that I have absolutely no idea why I was there and that I was just the spectator as anyone could have been had anyone seen the chase. Although I was at no fault, I felt something strange going on within me. I have never been at such testing moments.

Someone punched me hard on the head from behind. I could not take the punch. My head slammed on the table with a great noise. I exuded a loud cry of pain. When I lifted my head, I saw dust particles rising from the wooden table and getting lost in the darkness above when they got past the dim lamp.

‘I really have no idea’, I repeated myself in a lower voice this time.

The officer’s eyes transfixed with mine. They pierced through me, I felt. There was visible darkness everywhere, so I had no option but to look at him. I was afraid. He ordered his subordinate to unlock the blindfold of the teen. He looked at the officer and then at me. He too was surprised to see who I was! He seemed brave and wore some great pride in his capture. He looked rebellious. The way he kept his chin high and crossed explained it.

Before the interrogation began, I was shown to sit in a dark corner of the same room. The teen was very reticent. One would easily discern anger welling inside him when made to talk. He scoffed with great indifference which added annoyance to the man in Khaki. The teen’s eyes were sharp and unyielding, whereas I was shrunk in a corner seeing him.

The man in dominance thought that the teen knew no language so he stood up and took off his leather belt with a hope of a cognitive factor. He held it with a steel buckle, shining under the lamp and now nested in his palm. He took steps and went behind the teen. Till his shoulders, the teen’s eyes followed him and then retained the fixation on the empty chair now.

The teen knew his fate, I knew his fate too, also I knew mine. Two guards came to remove the sweaty shirt of the boy as if this was regular with them. The teen succumbed to it. There was no holding, there was no surrender. There was only indifference that increased from time to time. I was very afraid of everything.

The man in Khaki with all his might took a long swing and hit the belt on the naked back of a teen. I felt the hissing through the air when the heavy leather belt travelled. My eyes were closed, I kept on counting the belt falls on the back. I could see it coming on me. I was unsure if it was real or a dream of mine. I was afraid to open my eyes. The noise was enough to build necessary fear in me.

The slashing stopped. If I was not wrong in my calculation, the teen suffered thirteen hits, all more dangerous than the previous one. The man in power came to me and kicked my buttocks. I felt his boot’s toe. The kick was enough to get my eyes open and to unlock my arms which were spun around my feet. My head was concealed inside my knees and hands.

The man, our accuser came and took me out of the remand room. He led me out of the door. I did not oppose it. I had no capacity to do it. The teen could not see me. He was not interested. He was agonised but he was mute. I heard the sound of an electric thing being started. The similar sound I had heard before when the tree choppers came to my home to chop off the dead tree.

“Chop off his right wrist, show no mercy officer”, shouted the man in the black suit.

“I won’t,” replied the officer.

His voice finding hard to reach us through the noise of something which he was holding. I was led to somewhere, where, I don’t know and also I did not intend to ask. Fear can suppress the urge of asking questions. There came a window where we passed.

On my left, there was the most dangerous scene I had ever seen in my life. It was a brutal ‘wrist chop down’. We stood aghast! There was absolute calm on the teen’s face. The blades ran through his wrist halfway, I suppose.

“Wait” cried the man beside me and urged the heartless officer to cease the torture operation.

“Let the boy have that hand to do something when he grows up”, he added.

He then turned at me and looked into my eyes. His eyes, I could not bear. He kept both his hands on my shoulders and turned me the other way round. I felt a heavy kick on my buttocks again. It was wilder this time. It made me gain a few meters until I was struck violently on the pillar and after that all was dark.