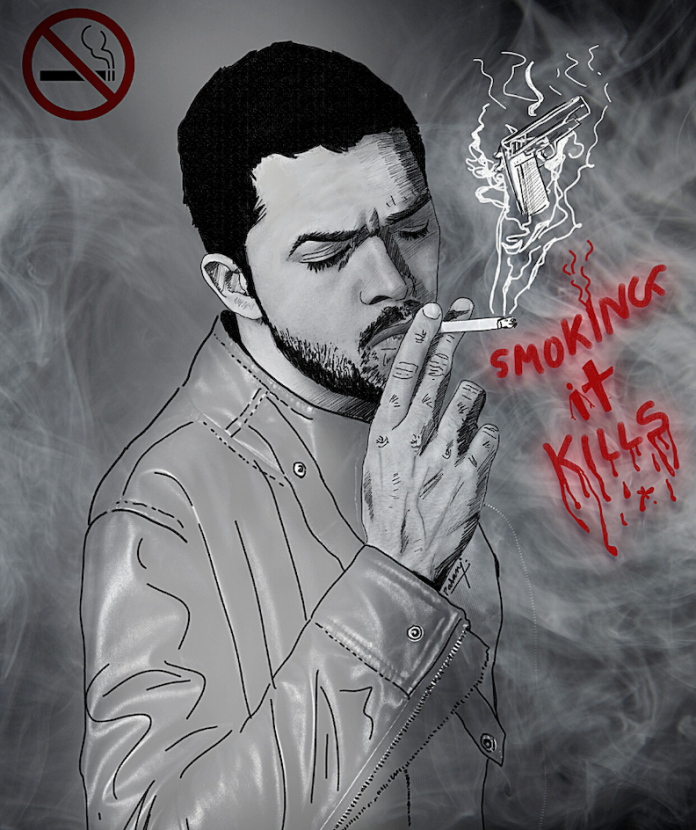 Joby and Simran sat across each other on the metal chairs with a metal table in between. It was a close dark room with a single bulb hanging down from the ceiling and illuminating the center of the room. It was not a date night. They both had been together for two years but today there was a different reason for this unorthodox meet.

The room in which Joby and Simran were, was an empty garage in the farmhouse of Simran’s dad. There was a single door for entry and exit behind Simran. The contents on the table were weird, no fancy dinner, no candle lights nor seven course meal. It had a pack of cigarettes, a lighter, an ashtray, and a gun.

“You’ll have to decide, Joby… It is now or never…” Simran spoke with tears streaming down her eyes.

“Don’t do this to me Simran… don’t do this… You know how much I love you.” Joby could not control his sobs, with a cigarette held loosely between his fingers.

“You have left me no choice dear… Please relieve me from this mess. Only you can take both us out of this or can sink me in and walk over me…” Simran hid her face behind her palms and cried inconsolably.

Joby was in his mid-twenties, working as a floor manager in a shopping mall. Born to a middle class family with no legacy, Joby tried to build his life from scratch. His parents had been retired and soon after Joby got his first job, they passed away in a car accident. Joby was devastated and all he had, was his granny, whom he could call family in this otherwise lonely world.

With his tedious and monotonous life at the mall and no friends to hang out with, Joby strived hard to make his mark. The colours in his life were painted the day when Simran stepped into his life.

Joby was taking the round in the mall when the lights went off due to a power failure. Simran who was heading out of the cosmetic department stumbled upon a trolly and bumped into Joby. With her high heels, her ankle paid a price with a sprain that made Simran’s walk very painful.

Joby like gentlemen, helped her to get on her feet and walked her to the parking lot where Simran’s car was parked. The swelling and pain made it impossible for Simran to drive her car. Joby smiled and offered to drive her car to her place. Simran was touched by Joby’s kind gesture. After all, he was just a manager and why should he care about all these. However the gentlemen within Joby did care about it.

“Thank you so much for helping me out.” Simran’s cheeks flushed pink.

“Please don’t ma’am, I just did what any other human would have done.” Joby smiled and stepped out of the car.

“At least you can come in, I make good coffee.” Simran unlocked the door of her house and stepped in to welcome Joby.

“It’s quite late ma’am and more than coffee you need some ice packs to be applied.” Joby politely declined the offer.

“I still don’t know how to thank you Mr…” Simran realised that she had yet not asked the name of the guy who had helped her.

“Joby… And you don’t need to thank ma’am.” That smile on Joby’s face cast every magical spell on Simran.

“Simran… Just call me Simran…” Blushing, she pushed the curl of her hair behind the ear.

“Take care Simran…” Joby bid her goodbye. Simran couldn’t take her eyes off him while he walked back. Joby too felt that sweet pinch of emotions that had begun tickle to him. That night both the birds were no more free and shackled in chains of love.

Simran was an interior designer, who had tie-ups with many architectural firms. Her work was among one of the finest in the town and so were her rates. The best part of her work was, she was her Boss and answerable only to herself.

Simran’s parents were rooted in their religion and once Simran grew up and was earning, they left the legacy for her and moved to the ashram of their Guruji. Simran made sure that she would visit them at least thrice a year.

The night when Joby left her house, he took a part of her with him. Whenever Simran was free she would visit the mall not for shopping but for the purpose to snatch a chance of talking with Joby or to have a glimpse of him while he wouldn’t be noticing.

Joby too had started falling for her. He would always snatch the chance to walk to the section where Simran would be pretending to be busy. However, Joby could not take a stance to step ahead and confess his feelings. He always felt that Simran was out of his league.

It was a week off for Joby and he liked to spend his evenings in a coffee shop with his coffee and cigarettes. Joby was enjoying his ME time, sitting outside the cafe when a car stopped at the opposite side of the road.

Simran stepped out of it and saw Joby that made her heart skip a beat. She couldn’t thank her stars more. She didn’t bother about why she had come there and her feet walked across the road to Joby.

Surprised Joby immediately stabbed his cigarette and got up to greet the love of his life, Simran.

“Hey… What a pleasant surprise ma’am.” Joby stretched his hand out.

“Just Simran… “ She blushed and shook his hand. Joby pulled a chair for her.

“I hope I am not a spot spoiler in your quality time…?” Simran asked pushing her hair curls behind her ear.

“Not at all, it will be some bright colours painting my otherwise dull evening.” Joby too played with words making her blush more.

That was the first time they had their coffee date. It was the best and memorable evening for both of them. Before parting, numbers were exchanged with promises for many more coffee meets.

Love started blooming between them with Joby leaving his OUT OF HIS LEAGUE insecurities aside. He realised that she is the kind of girl who believes in staying simple rather than those posh personalities, who have tantrums and attitudes flaunting with every step they take.

The coffee meets got extended to late night dinners with midnight walks to get those last few moments before the day ends. On his week off, Joby would spend the whole day with Simran, driving her to her work and meetings, accompanied by coffees, lunch, and dinners.

It had been a year then and none of them could muster that courage to confess their feelings, they couldn’t express how madly they were in love with each other. However, the only thing that Simran didn’t like about Joby was his smoking…

Joby’s smoking count was high, not only was he a chain smoker but his cigarette count had also reached towering high after his parents had passed away, , making him fall in with the class of chain smokers.

Two packs a day was doing no good to him. Nicotine powered his neurons and it was the reason for his irritated behaviour too, which was reflected clearly at his workplace. Joby would often shout at the ground-staff over petty issues even when customers were around. His verbal bashing was noticed by people in the higher management.

To make matters worse, Joby began to take frequent smoke breaks. Even in the mid of the busy floor and customers flocking in the mall, he would walk out for a smoke. Sometimes his craving for smoke would make him walk out of the staff meetings leaving his seniors shouting at him. The urge to smoke had badly twisted every nerve of his body that he would go speechless and numb if he could not get that one puff of nicotine. His temples would start

to throb and his fingers would fumble to get hold of that one cigarette.

The unacceptable and completely irrational behaviour of Joby was not tolerated by the management. Warning emails began to pop up in his mailbox with a potential threat of losing the job if he continued on with this unprofessional behaviour.

Simran too was worried about Joby. His smoke counts, getting pissed over tiny things and what not. However, she never lost her calm and tried hard to convince Joby that smoking could cost him much more than he could ever contemplate.