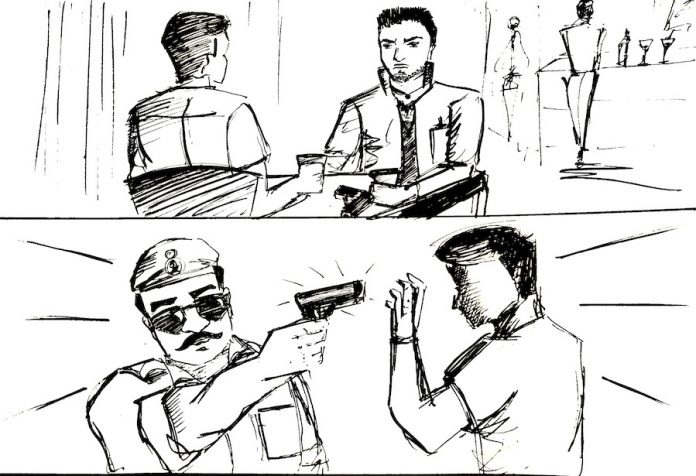 Rajveer plugged his headphones in his ears and played his all-time favourite track, “If today was your last day.” by Nickelback. His fingers started tapping on the rhythm of the song over the steering wheel. Whenever Rajveer was nervous or stressed he preferred this track at the loudest volume, turning everything silent around him and today, it was the same situation. Maybe even worse than he had ever thought of. However, he needs to pull himself together to get this done.

Music brought back the memories of college days, the time where he had always played this song in every rock show. The lowest temperature of BMW was also not able to dry his sweating forehead.

A handsome hunk and General Secretary of his college, Rajveer was a type of guy NOT TO MESS WITH, till you wish your life to be HELL. Rajveer had always been a leader, whether it is a cultural festival or a Gang fight. Rapidly, Rajveer had earned the reputation among the city youth.

“Got a problem? Talk to Rajveer.”

A close encounter with Zakir, the DRUG LORD of the city brought, Rajveer under Zakir’s influences. Zakir knew the potential market for the drugs in the college campus. And Rajveer was the best bet for him. Zakir quickly picked up Rajveer for his work, by obliging him in overpowering other student communities.

“Zakir is watching Rajveer’s back.” The words were enough for competitors of Rajveer to back off.

Once Zakir gained the total control over Rajveer, he started pushing him in his business of supplying drugs to the college students. Rajveer was nervous when Zakir shared his plan but soon the flow of money blinded his ethics and conscience. Money kept drowning Rajveer in the world of drugs.

Many a time, Rajveer was able to brush through cops in delivering drugs to customers. Soon Rajveer got used to it. But deep in his heart, he had a nightmare. The nightmare of getting caught with drugs on the campus. Once it happens, it would be enough to ruin his reputation and career.

A.C.P Vishal Agnihotri, the name itself was enough for every illegal business thug to shiver, was posted in the city. Agnihotri’s special mission was to hunt down the drug cartel. Zakir was well aware of Agnihotri’s past record. When it comes to duty, Agnihotri was a hunter who will hunt down his prey at any cost.

Zakir knew something else also of Agnihotri’s past. Something, where stings linked Zakir with Agnihotri. Zakir changed his modus operandi for supplying the drugs. The new way was to supply the small sachets of drugs, hidden inside the books of students by carving out a few pages within it.

Rajveer had moved far ahead and there was no way to back off, from the path of the crime he had chosen. Rajveer had developed the contacts with insiders in the police department. Zakir had very well taught him how to keep the cops hands greased in order to avoid the bars. But after Agnihotri took the charge, radars were fixed over Rajveer. Agnihotri knew that Rajveer will be the trump card to catch the Zakir. One single move and Rajveer will be behind the bars.

Rajveer had developed a small gang of trustworthy students, who were now working on Rajveer’s payroll and worked as a delivery man. Rajveer was more focused on getting consignment from state borders and drive it safely to the warehouse of Zakir. With more responsibility, Rajveer had more enemies too. On Rajveer’s last birthday, Zakir gifted him Beretta 92FS Pistol, one of the best in class.

On one fine winter evening, Rajveer was sitting in one of the finest Bars of the city. He was already down with three pegs of JD and fourth was on. Rajveer held his glass close to his eyes and tried to see through it. His vision was hazy and so was Rajveer’s future. He knew that it would be soon when he would be sitting face to face with Agnihotri. Just a day before, while taking the delivery of his consignment, Rajveer was shocked when Agnihotri raided the place out of blue. Rajveer was lucky enough to ditch the tail, that he picked up from the place of a raid. Though Rajveer’s supplier was caught by the police, Rajveer managed to save his skin for the day.

As it is said, your deepest fears surface soon to become reality. And this was what happened with Rajveer too. Two men walked in the bar and sat on the table located on a cross angle to Rajveer’s table. Their eyes were fixed on Rajveer. Rajveer was drunk but totally in his senses. His eyes didn’t miss the two men staring at him. Though they were in casual dress, Rajveer noticed their shoes and smiled.

Rajveer finished his drink in one large swig and dropped some currency notes on the table, gesturing waiter to pick it. Rajveer adjusted his gun tuck behind in his waistband. He was ready to leave when he heard a stern but calm voice.

“I hope you won’t mind a long drive with me?”

A man in his late 30s wearing a black shirt and blue denim stood in front of him. His eyes had the piercing gaze and a sharp jawline which was accurately trimmed with a thick moustache. Rajveer took less than a second to figure it out, that, his nightmare has come true. The man standing in front of him was none other than A.C.P Vishal Agnihotri.

Rajveer looked around and searched if he had any of his alibis around who could come to his rescue. Luck was not on Rajveer’s side today and Agnihotri played it very smartly leaving no option for Rajveer.

Rajveer silently followed Agnihotri to the bar exit. Rajveer was a bit surprised to see no cops around. The nice big car probably belonged to Agnihotri stood in front of the hotel gate. He stood frozen at the entrance of the bar. For a moment, Rajveer thought that A.C.P is not in a mood to talk. In fact, Agnihotri will drive him to outskirts of the city, and tomorrow’s newspaper headlines would scream his reality.

“Relax. You still are alive and yes free.” Proclaimed Vishal in his very unique style.

“Just want to talk to you. So now, do you mind taking a small ride with me? Just me and you.” Agnihotri kept his hand on the Rajveer’s shoulder and smiled.

Beads of sweat started lining up the forehead of Rajveer. Both of them stepped in the car and disappeared into the darkness of night.

After an hour, Rajveer got a call from Zakir, informing him that new consignment being on the way and that Rajveer needs to take the delivery of it. Rajveer reached the given location to receive the consignment. He smoothly passed the check post with 20 kg of COCAINE and drove straight to the Zakir’s warehouse, where every type of drug is stored safely in cargo boxes. Once at the warehouse, Rajveer called Zakir.

“I am at the warehouse but, I think the consignment is not up to the mark. I smelled it and it says everything.” Beads of sweat started trickling down the neck of Rajveer.

“Are you sure?” Zakir was a bit surprised with what Rajveer just said. The consignment came from one of the most trustworthy parties of Zakir.

“Yup, pretty sure, plus cops are smelling my tail. Come to the warehouse and keep it low. I am sitting in a stolen BMW, parked in the dark alley, opposite the gate of the warehouse.” Rajveer ended the called and exhaled the sigh of relief.

He pulled his headphone out and pushed the buds in his ears. Rajveer’s all-time favourite track, “If today was your last day.” by Nickelback started playing. His fingers started tapping to the rhythm of the song over the steering wheel.

In the next ten mins, a Skoda came from the opposite end. Zakir stepped out of it keeping the headlights on. As suggested by Rajveer, Zakir was alone. He pulled his headphones out and stepped out of BMW. Zakir came close to Rajveer and signalled him to get in the BMW. Once in the car, Zakir checked the quality of cocaine. Rajveer slid his hand to his back and gripped his Beretta. Very softly turning the safety lock off, Rajveer kept his gun clutched tightly in his hand.

Zakir gave a quizzical look to Rajveer after checking the quality of COCAINE. Before Zakir could react, the BMW was surrounded by officers of the Crime Branch and Narcotics Department.

“You filthy rat. You betrayed me.” Zakir screamed on the face of Rajveer. Before Zakir could pull out his Glock, Rajveer pointed his Beretta on Zakir’s head.

“I am sorry for this.” Zakir, now frozen in his seat. Rajveer pulled the hammer back. Terror was clearly reflected in both pairs of eyes.

“You can’t keep me in bounds for long. In 24 hours, I will be out on bail and screw you up in the next 48 hours.” Zakir smiled and said to Agnihotri.

“Who’s arresting you?” Agnihotri eased his grip over Zakir’s neck and took two steps back.

Before the words could stop echoing in Zakir’s ears, a shot was fired from the service revolver of Agnihotri, making a hole in Zakir’s heart. Zakir dropped on the road and blood started oozing out of his chest.

Rajveer froze in his seat, as he saw Agnihotri shoot Zakir. Rajveer started shivering. His gun fell off.

“This was not the plan.” Rajveer spoke in his head. It was just a simple plan. Agnihotri would arrest Zakir, and Rajveer would help Agnihotri in getting Zakir. It was simple, but cops can never be trusted.

Agnihotri then moved to another side of the car and opened the door for Rajveer to step out. Rajveer was shivering with fear and moved out of the car. His heart kept pounding as the feeling of him being the next started gripping him. Rajveer saw the lifeless corpse of Zakir lying on the road.

“I killed him, cause the arrest was not going to keep him long behind the bars. I lost my brother of your age, because of cocaine supplied by Zakir. This was personal.” Agnihotri pushed his gun back to holster and continued.

“Everyone doesn’t get a second chance Rajveer. My brother never got. But you have your second chance, don’t waste it.” Agnihotri kept his hand around Rajveer’s neck.

“I hope we will never meet again.” Agnihotri smiled.

“Go back, you have a life ahead. Good Luck.” Agnihotri finally patted Rajveer’s back and left.Rajveer walked back to his life where he was not a CRIMINAL anymore.