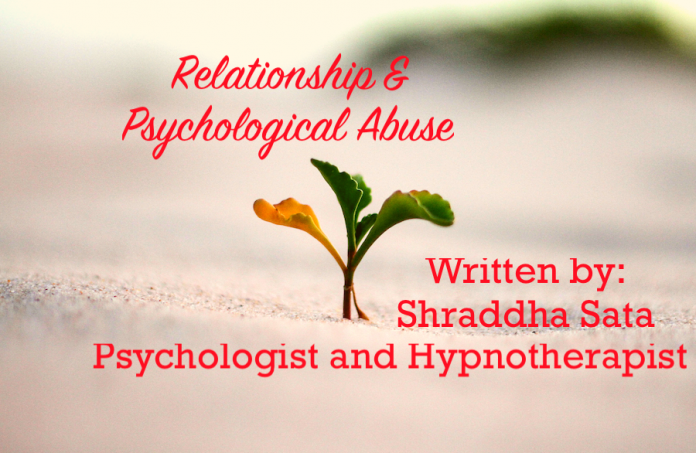 When we hear the word abuse the first thing comes to our mind is violence, scars & bruises, mean comments and taunting. It is Physical Abuse when any form of violence, such as hitting, punching, pulling hair, and kicking, etc. takes place and Verbal Abuse is, names calling, passing mean comments, using slangs and etc. Sexual abuse involves rape or other forced sexual acts, or withholding or using sex as a weapon. We are very vocal about these abuses but there are other types of abuses which are not paid attention to. In all this, abuse recognition of the victim and the abuser is easy. At times there are few things that cut even deeper than daggers and blades and take longer to heal than the scars and bruises and at times makes irreversible damage, not only on our body but on our soul and personality, on our hopes and perceptions and most importantly on our self-esteem and self-identity. It’s so grave that, at times, it takes years or entire life to make peace with it and in some cases momentous even afterlife (How? But now that is altogether another topic for another day!)  The most dangerous part is, it often goes unrecognized by the victim themselves thus making it hard for timely interventions and support and thus making the recovery way too challenging. The biggest concern is once the victim realises, the challenge is to battle against a beloved. YES, THE MOST DIFFICULT AND DREADED THING IN THE WORLD.

It is not emotionally abusive to yell at your partner or parents — this is one that quite often gets blurry. So let’s stop and talk about it for a moment. Everyone yells sometimes. Now screaming at someone hysterically in an emotional verbal assault is considered to be emotional abuse. Yelling as the first and only response might also ultimately be called psychological/emotionally abusive as well. But when a husband and wife, or parent and child, occasionally yell at each other, this is just a normal expression of emotion. Once the emotion has been expressed, it probably would be a good idea to sit down and talk about it to find a solution to the problem. Psychological abuse can be done in a number of ways. The following are some commonly found signs (not the only signs) to be taken into account.

Arguing over trivial things and making you apologise: For small things like missing their calls or taking long to reply to their messages, turning up late, be it for a date or returning home, etc. abuser makes you apologise.

Overreacting and yelling:They react wildly to the conversation – getting very angry and yelling, screaming, and swearing are meant to intimidate and make you feel small and inconsequential. It might be accompanied by fist-pounding or throwing things.

Public Embarrassment & Belittling of your accomplishments:An Abuser may say mean and unpleasant things in public, they also violate victims privacy and discuss their (victims’) weaknesses to others in front of the victim. Or just make fun of victim’s shortcomings, for instance, body shaming or statements like he/she can’t even do a simple homework/task on hand in front of others or even belittling victim’s achievements.

Being Dismissive:One of the most important sign is being dismissive of victims’ feelings and sentiments and/or opinions. You tell them about something that’s important to you and they say it’s nothing or dismissing your opinion. Body language like eye-rolling, smirking, headshaking, and sighing help convey the same message.

Pushing your buttons:Once the abuser knows about something that annoys you, they’ll intentionally bring it up or do it every chance they get.

•    Threatening:An abuser might threaten to expose the victim in a way that they find embarrassing, or abuser may threaten to take something important away from the victim, such as money, home, or even kids, or be it to commit suicide.

•    Gaslighting:It’s the act of manipulating a person by forcing them to question their thoughts, memories, and the events occurring around them. A victim of gaslighting can be pushed so far that they question their own sanity.

Financial control:They might keep bank accounts in their name only and make you ask for money. You might be expected to account for every penny you spend. So as to maintain power over the victim and make them dependent.

Unpredictability:The abuser will explode with rage out of nowhere, suddenly shower the victim with affection, or become dark and moody at the drop of a hat to keep one walking on eggshells.

Using others:  Abusers may tell you that “everybody” or “Certain important people like your parents or friends etc.” think you’re crazy or mean or selfish or worthless or stubborn etc.

•    Property Damage:This skirts the line between physical and emotional abuse. An abuser may break something they know will cost the victim financially or something that is meaningful to the victim, as a way to punish and remind the victim of the power they hold over them.

Using guilt:Often seen with parents (but not limited to parents) who take their children to guilt trip (in some cases even with the young adults). They might say something like, “You owe me this. Look at all we’ve done for you, we spent so much on your education and give you this lifestyle” all in an attempt to get their way.

•    Jealousy:Abuser may accuse the victim of flirting or cheating on them. Jealousy is not only limited to romantic partners, at times kids might get insecure of their siblings or mothers-in-law for their son after marriage making them act in hurtful ways.

•    Turning the tables:Abuser blames the victim to cause their rage and control issues by being such a pain and accuse the victim for the abuse.

•    Blaming you for their problems:Whatever’s wrong in their life is all your fault. You’re not supportive enough, didn’t do enough, or stuck your nose where it didn’t belong.

•    Monitoring your whereabouts:They want to know where you are all the time and insist that you respond to calls or texts immediately. They might show up just to see if you’re where you’re supposed to be.

•    Deprivation:Be it depriving the victim of important materialistic things or love and affection.

Remember there is a very thin line between what psychological abuses is and what it is not, before reaching to any conclusion please take help of any responsible adult or BEST, consult professionals in the field. You can seek the help of a psychologist, social worker or advocates, each country has some provisions in the legal constitution for psychological abuse.