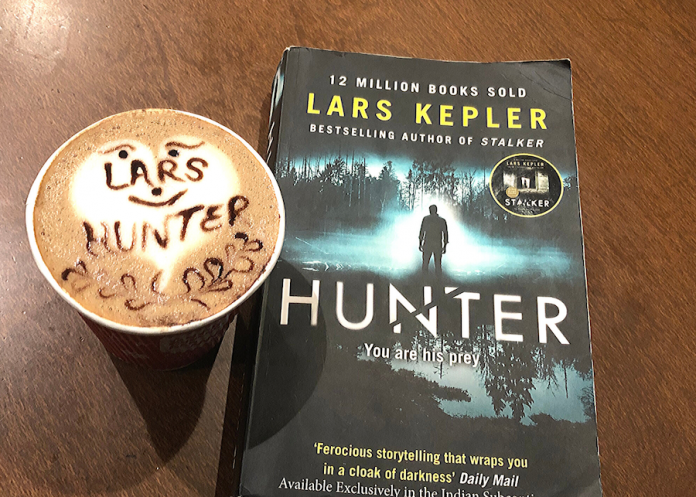 Tried to get to heaven on the end of kite.

Kite string got broken, down they all fell,

Instead of going to heaven, they all went to Hell…”

Sounds a silly nursery rhyme but it leads to series of brutal and heinous murders, stacking up bodies like a pile of papers scattered around.

Welcome to the world of Joona Linna, an unorthodox, famous detective with a shabby and shady past.

Hunter (The Rabbit Hunter) is the sixth book of the Joona Linna series by Lars Kepler. A series never meant for weak hearts.

The story opens up with the brutal murder of a Swedish politician in his home. The Code Platinum, an emergency at the national level, is triggered by an escort who has witnessed the murder and was present in the house.

Saga Bauer, an operative with Security Police, specialising in counter-terrorism, is the first to respond and report that the Foreign Minister is dead. This leads to triggering a series of political actions involving the Prime Minister of the country. The hint of terrorism in the last words of a killer to the foreign minister creates havoc in an otherwise calm mind of Prime Minister.

To get this case solved quickly before another political celebrity goes down is a priority now and Joona Linna is the only option for them. But Joona is serving his sentence in a high-security prison (due to instance mentioned in the previous book) and Saga Bauer is pressing hard to get his old partner out of prison.

With Joona back in town and Saga in his team, the duo leaves no stone unturned to infiltrate the Brotherhood of a highly connected clue, Ratjen.

The body count keeps on piling with next in line is Teddy Johnson, U.S. Defence Secretary.

Rex Muller, a celebrity chef, and an alcoholic is struggling to mend the loose ends of his personal life. Rex had been caught in the CCTV of foreign minister’s house when he was urinating in the swimming pool of the house before the death of the Minister.

David Jordan a.k.a. JD is the manager and business partner and friend of Rex have his own past and battling with his narcoleptic disorder. Rex is entrenched in the investigation of the foreign minister’s death. DJ comes up to pull Rex out of it as so much is at stake with their upcoming venture.

The strange murders continue and Joona finally pulls the common thread among victims which leads the investigation away from terrorism to personal vendetta.

Will Joona be able to crack the case…?

Will the Hunter be able to kill his rabbits…?

Does Rex has to do anything with all these…? Can he trust the people around him…?

MY OPINION: First thing first, I am one of the fans of Lars Kepler. And I must say that with all the previous books I have read, I never settled down without goosebumps and Joona Linna as one of my favourite characters.

With this book, the author is back with more thrill and darkness of the modern world of a high and elite class of society. The story deals with a lot of brutality and vicious murders that can leave you aghast.

But… every good book needs a good reader who can use all his patience to sink in the story for the nail biting experiences.

Apart from good things, the story has so many characters and that slows down the pace of the story so technically, I won’t call it as a fast paced book.

There are side plots with some depicting massive actions and adrenaline pumping chills but seem nowhere near to connect to the main plot. All I can say in last is, this is a heck of book which will need a lot of patience and few breaks in between but you’ll never be disappointed. This book (Hunter/The Rabbit Hunter) definitely has a place in your bookshelf.