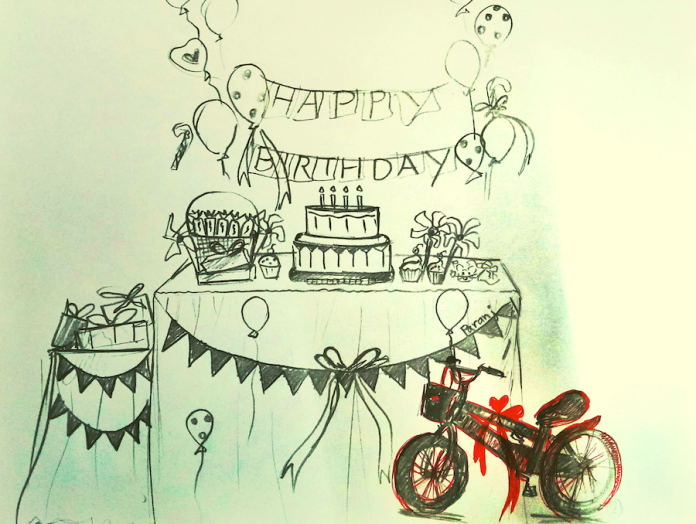 Lalit Solanki, a reputed architect of South Delhi was busy with arrangements that would make this party an iconic one. He had hired the best even management team for the same still wanted to be there at every stage. Nitin his bundle of hope and dreams was turning 12 tomorrow.

Nitin was very much excited to look at every arrangement that was being done. He had always asked his Dad for such grand celebrations for his own birthday, but it was never made possible. Lalit always had a reason to say no and postpone it.

Well, there were reasons for saying so. Lalit was not born with a silver spoon, he had no rich family, no legacy. His early childhood was a compromised one, where a child gets happy on birthday by distributing sweets among his friends. Rather the world then was different that we have today.

“Oooooo…, Thank you so much, Dad. This is going to be my best birthday, ever.” Nitin sat on the couch with Lalit, admiring the arrangement.

“Anything for you son.” Lalit smiled, looking at his son and ruffled his hairs. The joy was visible in the sparkling eyes of Nitin which was bright enough to brighten the entire space there, rather the halogen lights seemed dull.

“Dad, can I ask you something?” Nitin, looking at Lalit, asked.

“Ya son, you can, always.” Lalit replied looking in the joyful eyes of his son.

“Do you remember all your birthday parties Dad? Were they this grand or more than this? How old were you, when you celebrated the best birthday ever?” Why did Nitin ask these questions was an unsolved mystery but he did it and Lalit was all taken away into the ocean of his childhood memories.

“Child, those were the days when such birthday parties were rare, even if they happened they found a place in riches. They were meant for people who belonged to a different society than ours…” Lalit replied with a lopsided smile on his face. It was too late when Lalit was introduced to something called a party. But the memories were still fresh in his memory book. Taking a deep breath, he continued.

“I never knew that a birthday party can be this grand wherein you have guest, so many gifts, big cakes, etc. I still remember when once your Dadu told me to finish my work in time so that he can take me for dinner that night.” Saying this Lalit was all in his childhood, he closed his eyes and memories started floating. Nitin was very much patient to hear his Dad.

“On the way, we stopped at a toy store and your Dadu bought a badminton racket, my happiness was multiplied, I was surprised to see this changed attitude of him. I hurriedly grabbed it and wanted to play but your Dadu scolded me for that and said it was a gift for someone who was celebrating his birthday that evening. He was the son of your Dadu’s boss.” Lalit spoke with closed eyes.

“What happened next Dad?” Nitin’s curiosity was at its peak now.

“When we reached there, we saw many people. There were so many guest and their kids. The house was buzzing with people and was beautifully decorated with lights and ribbons. Everyone was dressed in their best, except me. We greeted the Dadu’s boss and wished his son too. That was the first time I learned to wish HAPPY BIRTHDAY in my life.” Lalit opened his eyes and looked at the dark sky lit with millions of blinking stars.

“Dadu got busy in helping the house staff to arrange the dinner and drinks as it was mandatory in those times that you need to help your boss at his house when there is any function.” A lopsided smile was on Lalit’s face. These feeling were already buried deep in his heart.

“I kept walking in the garden, watching the guest. Everyone was busy in their talks and were in their own world. Kids, on the other hand, were playing in the other corners of the garden. I saw the heap of gifts and walked near.” Lalit’s eyes turned moist.

“I saw a bicycle wrapped beautifully which was one amongst that heap of gifts. Those were the days when a bicycle was a dream of every child. Not everyone could afford to have one. I could not resist myself and kept moving slowly in that direction. When I saw, that people are busy and no one would mind me going there, I quickly touched it and rang the bell too.” Lalit had all of his memories choking him, he asked for a glass of water and three of his helps appeared the next moment. Sipping some water, Lalit continued.

“The moment I rang the bell the sound was like a boom. The birthday boy came rushing and pushed me away. I fell on the ground and tears started rolling down my eyes.” Lalit closed his eyes, reminiscing every moment of those memories.

“Oh my god… Then what happened Dad?” Nitin was all alert by then since the feelings had now taken a new turn.

“He screamed at me saying not to touch his bicycle since it was his birthday gift. His shrilling voice gathered almost every member of the house along with your Dadu and his boss too. Everything came to a still now, I was lying on the floor due to a tight hit by that child. His father took him away saying you should not do such things. But this had changed your Dadu’s mood, he took me by my hand and dragged me to the kitchen and asked me to be there.”

There were tears in Lalit’s eyes and even Nitin’s eyes were moistened. Lalit saw that and realised that things were turning off track. He didn’t want his son to feel the pain he felt that night. He immediately wiped off his tears and smiled at Nitin.

“I stayed in the kitchen and was watching everything from a small window, I could clearly see the bicycle standing there too. I learnt many things that day including that you get a bicycle on your birthday, how kiddish was that.” He brushed off his thoughts which had started hurting him now.

“From that day onwards, I kept asking Dadu when will I celebrate my birthday. Next day, Dadu, took me to the back yard and planted a sapling there, he then told me that when this plant will grow tall and match to my height, it would be my birthday.” Nitin blasted listening to this wonderfully cooked story of Dadu. Lalit too smiled nodding his head sideways, thinking of his foolishness. But then, he was just a kid.

“Dad, did you really believe those words of Dadu?” Nitin asked trying hard to hide his laughter.

“Well, I was not a smart kid as you are.” Lalit smiled and continued.

“I did Nitin, and then I started taking care of that sapling, I started watering it, feeding it with best manures so that it grows as fast as me. I did all I could for the growth of that plant.” Lalit’s cell buzzed. He turned his eyes off the screen blinking some business call since he thought being with Nitin was more important.

“Dad, when did the plant grow?” Nitin clung more to his Lalit’s arm, asked.

“Hahaha, it definitely grew. The plant grew to my height one fine day and you know that was exactly on the day of my birthday. Dadu invited all the relatives, preparations for the evening dinner had started right from the morning. Everyone wished me and blessed me but there were no gifts.” Lalit paused for Nitin to respond.

“What? No gifts? And what about cake?” Nitin was shocked now.

“In those days, cake was not in our culture. And moreover, we couldn’t afford it too.” Another lopsided smile hung on Lalit’s face. It was tough for Nitin to comprehend all these.

“The day passed with all of my relatives around and by night everyone left, leaving me, Dadu and your Dadi alone. Dadu brought a pair of new clothes for me, few relatives gifted me some storybooks, pencils and few small yet useful things. But I was waiting for my bicycle.” Lalit paused here and the next moment there was a person wanting Lalit to check the arrangements since they were done with them.

“Sir, all the arrangements are done. You can take a look at it and let us know if there are any changes to be made.”

“Can you please ask Mom; she is out there.” Nitin reacted even before Lalit could answer. The guy left and Lalit continued with his story.

“I asked Dadu for my bicycle, cause of the memories of past that I’ll get a bicycle on my birthday. Dadu told me that he had done lots for his birthday. It was difficult for me to accept that and I started crying. I cried a lot. I didn’t eat and dozed off with those unstoppable tears.” Heavy sigh of Lalit was easily sensed by Nitin.

“That night, your Dadi told Dadu to arrange for something that will make me happy, she asked him to invite few of his office friends and buy the bicycle for me.” Lalit smiled looking at Nitin.

“Did you get the bicycle then, dad?” Nitin asked, with his eyes wide opened.

“Yes, Dadu did buy me a bicycle but a used one, I mean he bought a second-hand cycle of one of his friend’s son for me with a new bell fitted on it. I was on cloud nine that day and this was how a wonderful day, my BIRTHDAY, came to an end.” Now there was another buzz on his cell which was unavoidable, he left leaving Nitin alone with his thoughts.

Nitin could not believe how different childhood his Dad had. That night, Nitin could not sleep. He even had, tears rolling down his eyes whenever his Dad’s story popped up.

Next day, Nitin left for school but never reached there. The day passed and the time when he should have been back had fallen back a couple of hours. Everyone was worried and started searching for Nitin. All the guests were home in the evening but Nitin was seen nowhere. Everyone was tensed and calls were made to the police too, they had even lodged the missing report of Nitin.

After some more time, a bunch of kids from the local government school came at the compound gate. The security guard was about to shove them away as he thought these were those beggars who come and spoil the stuff.

Guess what, the bunch of boys were not alone but Nitin was with them. Nitin stepped out of the crowd and security guard immediately saluted him and rushed to inform Lalit that, Nitin was back. Everyone rushed at the gate to check whether Nitin was fine.

Lalit and his wife too rushed to check up with Nitin. They at once took him by their side and held him closer to their hearts. Nitin too was smiling as he looked into his Dad’s eyes.

“Can they also be the guest for tonight, Dad?”

Tears rolled down Lalit’s eyes since he never had imagined this gesture of Nitin. He just smiled proudly and said.