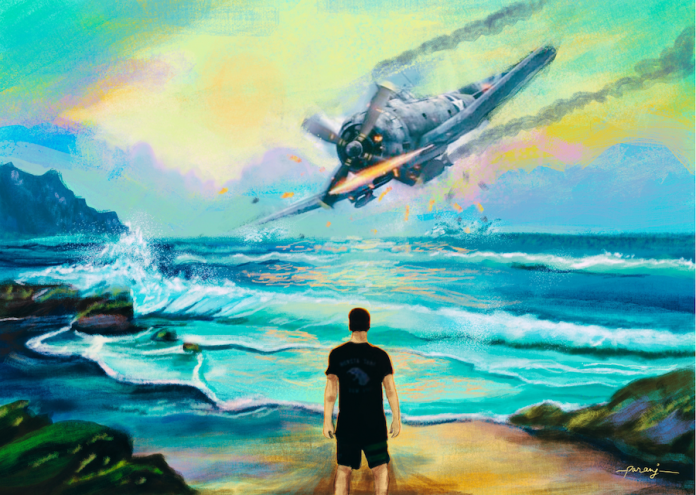 It was a sleepless night for Andy, he had today lost the count of time, a wink, and the dawn broke.

“What could be my calling…?” Andy asked himself

“I have already wrapped up my old life and I am here… my life is here. What else could be my calling…?”

With no answers, Andy took a few quick drags of his freshly lit cigarette before he started his day with an early workout session to give his body the much-needed sweat.

The day was pleasant and Andy felt himself back and rejuvenated. He too was surprised with a flush of energy within him. The day went well for him and he was back at his favourite spot at night.

While Andy sipped his Jack with a drag of smoke he was trying to figure out what had changed suddenly within him. It was just then the flashes of memories triggered in front of his eyes of yesterday night, the night with Grace. That peck on his cheek and those warm whispering words of her.

Andy realised with the second sip of his drink how much he liked Grace to be around. Those small talks with her, late night strolls at the beach in silence with Grace trying to match his footsteps on the sand.

A gush of Adrenaline was making its way he was now missing Grace badly. The cupid was about to shoot the arrow when Andy smiled and tried brushing off the feelings.

“We are not meant for each other…” Andy ruffled his hair trying to bring him back to reality.

Days kept passing and Andy was busy with his tourists His spirits were high and his passion for work ran superbly fast. This weekend he had a rock show for which Andy had already got more than what his limit was. The show was jam packed.

It was Friday night and the band that was to perform tomorrow, the stage was all set to rock the place. Everything was a double tick and everyone peacefully retired since they knew it’s gonna be a long day tomorrow.

Andy pulled out his favourite single malt and poured his drink. Lighting his cigar, Andy walked to the stage that was set in front of the beach. Taking a long drag of his cigar, Andy stood, admiring the lighting and all the techno-geek setup. It was then that he walked closer to the backstage, Andy heard an angry hissing and furious voice. He walked closer.

“We need to smoke those rats out. That’s the only way to flush those bastards from this place.”

“And that would be a suicide. Look around, we are outnumbered.”

“Look around, we don’t have enough birds and more than that I can’t let my best lad to do something stupid like this.”

“You are saying its stupid but deep down your gut, you know I can do it and Hell I am gonna do it… Sir…”

Andy’s heart lurched in his chest, his mouth dried as he gasped for breath. He got hold of the iron rod lying in the corner and walked hurriedly backstage just to find no one. He immediately called his staff and asked them to look at every corner.

“There were two guys, thick American accent. Find them anyhow.” Andy was pacing furiously with his people in search of two men.

For two hours, they searched every corner possible and the nearby vicinity which was nothing but an open wide beach. It was all in vain.

“Are you sure sir there was someone…?” The manager asked Andy sheepishly.

“You think I am bloody joking… you think I’m insane…?” Andy was mad at the manager. That night, Andy stayed at the beach taking strolls with a couple of beers and an iron rod in his hand till the dawn. Beer could not wipe out his vigilant senses.

Lighting the last cigarette, Andy, for the first time, felt that there was no one and maybe he was hallucinating. He angrily crushed the half-done smoke and screamed to himself.

“Fuck you Andy… What’s wrong with you man…?” He kicked the empty beer can that came across his way. This time, he was frustrated and angry rather than perplexed.

The show finally began at night and as expected went well without any hiccups. Andy wasn’t quiet but avoided conversations. Grace was back in the evening, a bit relaxed.

Grace avoided the rock show and walked to the lake where Andy was out for a smoke break. She could sense that he was still lurking in that gloomy feeling. He was looking at the vast darkness spread across in front of him over the lake.

“Still searching your peace…?” Grace whispered as she walked to him while Andy was lost in his thoughts. She sat next to him and smiled. Andy shook his head in exasperation and looked at her. She kept a hand on his shoulder and asked.

Andy with a heavy sigh narrated what had happened yesterday night and how he looked fool and insane in front of his people. Finishing his drink he refilled the glasses this time for both of them.

“I just don’t have answers for all that happening. Damn…” Andy said.

“Do you really want answers…?” Grace sipped her drink and waited for Andy to light the cigarettes for both of them. Andy passed one smoke to her and just gave a brief node. He was lost again but this time in those beautiful eyes of her.

“I can help you dear…” Those feelings of concern in her voice made Andy’s palpating heart slow down. Her words were kind of Beethoven’s symphony to his ears.

“How can you help?” Andy finally mustered all the courage to continue the discussion. He knew she won’t back off till she has made her point.

“Meditate…try to do nothing absolutely nothing,” Grace said and closed her eyes, her flawless beauty this time was beaming with peace.

“How on the earth can you think that this spiritual shit, oops meditation … gonna work for me…?” Andy hadn’t even a wild thought that Grace would suggest this.

“Andy, believe me, meditation can unlock all the ways, it helps you look at anything with a different perspective.” Grace sipped her drink followed by a drag of smoke and continued.

“If you feel it makes sense go ahead, if not its again your decision which I would bow down to.” Andy was all ears to her and Grace nodded.

“I too was like you but things change with time. Last time I went to Rishikesh I was with these Tibetan monks who introduced me to this new world of meditation where I happily dwell these days ” Grace’s eyes were shimmering brightly like two of the stars have come down to settle on her face.

Reluctance was now moving towards acceptance and Andy was lost again but this time it was the two stars closer against the stars that he used to look for answers. Thus started the whole new chapter called mediation, now the mornings began with meditations which sometimes even engulfed the afternoons.

Though Andy felt more relaxed and calm at end of every session, the answers he was seeking were nowhere near. He wasn’t sure if this is what he should continue

It was one of the morning sessions and for Andy, it was more than usual ones. They were in mid of the session when Andy could see the clear visions of what he experienced and then those weird incidents started floating in his head, the plane crash, the dead body in water, and the chatter of two foreigners.

Andy could visualise the plane crash, how it was targeted down by another fighter plane. He focused more and could see the crash happening fresh. The chaos, people panic-struck running helter-skelter. Buildings turned into ashes with airstrikes.

Andy opened his eyes with aghast, he was breathing heavily and was drenched in sweat.

“I need to find this place…” Andy spoke as he narrated everything that he had seen while he was meditating.

“Fair enough.” Grace pulled out her diary and started taking notes of all that Andy spoke.

“I’ll travel with you. I want to be with you in your journey of finding answers to all that has been disturbing you since long.” Grace opened her arms to fill him in, Andy felt the warmth, the love, and that peace which he had never felt before.

For the next couple of days, they were busy making travel plans and booking tickets to various destinations.

They travelled to many beaches and ticked them off as they continued their endless and uncertain journey. It was already a month and they were yet to discover the right place. The next place on the list was was Pearl Harbour.

Andy was sweating now he could visualize all that he was searching answers for. His vision was getting clearer, the soiled uniform, the badges, the cap, the pride everything was in place.

Anthony Brown, he read, yes the badge that was proudly resting on his chest read Anthony Brown. Everything around was mayhem with Japs shooting and bombing the whole place.

“I can just invade these Japanese if you allow me, Sir,” Anthony was pleading repeatedly.

After a long yes and no and if and but session, Andy was in his fighter plane to smoke out all the Japs away. He did all he could to bring in what was needed. After a long struggle, the Japs were seen fleeting back. But this wasn’t the real picture the moment of happiness and victory was too short lived as there was another attack, this time it was from the enemy and Andy had to lay himself for his country. He fought till his last breath.

The burnt body of Andy finally landed at the shore of the ocean. Tears had made a way down as he narrated everything. Grace pulled him and hugged him tightly. This was what Andy was in his past life.

“You’ll see more, don’t lose it dear.” She whispered and Andy closed his eyes again. This time it was Grace, he had a flashback of all that they did, walking through those farms, sipping wine in, lying carelessly on the dewy grassland, gazing at the sky full of stars at night. Grace was his fiancée.

Andy’s eyes were wide open as he saw Grace now standing in front of him with that same smile she had seen years back on her face even just before he was on his fighter plane.

“All these years, I waited for you to come here and embrace me in your arms Anthony…”

Andy wrapped her tightly in his arms only to let her soul set free from this earth. Grace disappeared in the glowing sand dust, leaving her fragrance on Andy forever…