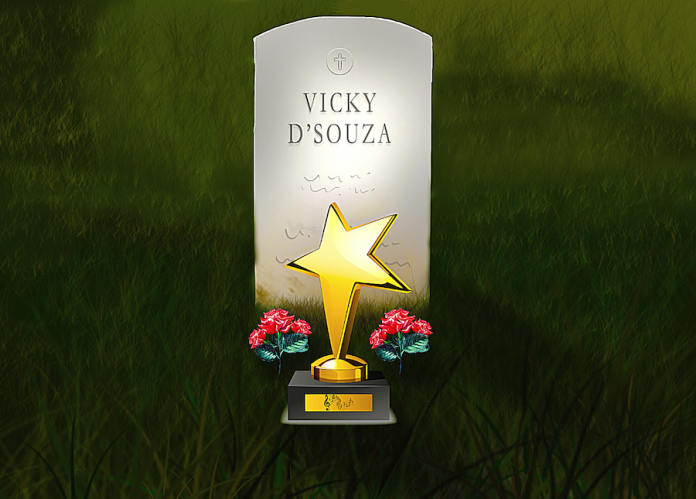 Vicky lay on the floor of his flat, fighting hard gasping for a few more last breaths of his life. As his eyes flickered to get the last glimpse of the love of his life, tears started to roll down his eyes. He tried to reach, to feel that touch just one last time but his lungs gave way. The knot in his stomach began to get tighter with every passing moment. Tears rolled down his eyes but it was too late. Vicky had to say goodbye to the world and to the love of his life.

His eyes closed as his lungs seized to function after sucking in the last breath with tears in his eyes he unwillingly bid the world goodbye. His soul started its journey for heavenly abode.

A lifeless body of Vicky was discovered by the neighbours when the foul order couldn’t stay confined within the walls of his flat. Heck of the smell it was, Vicky had been dead for two days. No one to be around except a girl who admired him more than anyone could for the music Vicky used to create, Vini.

Vicky was doper. His body when discovered was surrounded by packs of cocaine. His guitar stared aimlessly at his lifeless body. One of the most talented guitarist, with no fame, ended up taking his life in the race to fame at the hands of drugs.

Vicky was a college dropout from Fergusson College, Pune for the self-same reason. Possession of cocaine on campus was the sole reason for being rusticated with immediate effect from the campus, two years ago.

Vicky neither gave up on music nor on drugs. Most of the time he would stay confined to the four walls of his flat, making awesome music notes on his guitar. The only time he used to step out was to get a new stash of cocaine, some food, and to meet the music directors. The doors of the music companies were slammed right on his face even before he could knock them.

With no family support, the cash crunch pressed down on him harder and this made him sell his music to the cheap buyers who always roamed around him like vultures, that hover around such talent to get the entry from the front door of the music industry.

Vini was his junior in the college. At the very first sight, she fell for him. She was madly in love with him and the artist within him. Though her feelings stayed within her heart with a fear of rejection, it could still be seen in her eyes whenever Vicky came in front of her.

After Vicky was thrown out of college, only Vini kept in touch with him. She tried her best to help Vicky out with music and to compel him to give up drugs. Frustrated with his fate and life, Vicky pushed her out of his flat and life slamming the door on her face last week.

“Vicky please let me in… Please… Don’t let me out of your life… I love you, Vicky, I love you…”

“Get lost from here and my life…” Frustrated Vicky screamed back from inside.

Helpless Vini stood outside the with tears rolling down her eyes. She banged at the door begged Vicky to let her in. She wanted to be there for him as she knew he was falling apart.

She could foresee that the day was not far when cocaine gonna take over Vicky’s music and body. And within a week her fears faced her. It seemed her ill fate had been playing peek-a-boo with her.

Cops checked Vicky’s apartment for any other illegal or unlisted items apart from cocaine. Vini was the only one to stay back till the formalities were completed and Vicky’s body to be taken for the Post-mortem. It was predetermined that his death was due to an overdose of cocaine. Vini saw Vicky’s diary in which he used to write the notes of his composed music lying next to his lifeless body. The diary was the only lifeline for him that portrayed the other side of Vicki, his best music compositions.

“You cannot touch or take anything.” A cop held her hand from the wrist, restricting her from corrupting the site.

“It’s his music notes.” Vini looked at the cop with fiery teary eyes gutting their way through her eyes and rolling down her cheek.

Embarrassed inspector let her free from his firm grip and let Vini take the diary. It would be the only memory and one snapshot in which they were together. That picture would now stay with her for the rest of her life.

It was one of the most beautiful evenings in the world of music, the award ceremony. The venue was crowded with various Legends of music. The anchor of the show was now about to announce the award of the best music composition.

“And the award for the best music composition for this year goes to… Yes, you are right…. Miss Vini. Please welcome the youngest and the most talented music sensation of the era.” The enthusiastic anchor announced on the stage.

Vini walked to the stage, her every step was enlightened by flashes of the cameras. Every step she took made her heart feel heavier and heavier. Before stepping on the last step she paused to take a deep breath and muster all her strength and courage.

Vini accepted the award from the hands of A. R. Rehmann, the God of music in the Indian music industry. She thanked him and the anchor turned to her to address her. To shower her with few questions.

“So Miss Vini, this is the greatest honour anyone can get at such a young age. I’m sure you must be feeling more excited than me.”

“I am, but it would not have been possible without someone who actually deserves it.” Vini’s voice started shaking as tears rolled down her eyes. It was Vicky’s diary that had helped her to reach this stage.

“The person who deserves this award is VICKY. He was the one who has composed this music which is labelled in my name. Sadly, he is no more with us.” Vini broke down and could not say anything else.

Mustering her courage and overcoming her saddened heart. Vini stated the story of the love of her life. Tears started rolling down everyone’s eyes when Vini narrated the story of Vicky to the audience that kept applauding.

That night she went to Vicky’s tombstone and kept the award on it that he deserved. With a heavy heart, she could only say.

“This is your Fame… You deserved it, but not at your tombstone.”

The rain started pouring down heavily washing her tears but not her sorrow. Nothing had or could fill the vacuum created in her life by Vicky’s sudden untimely demise.