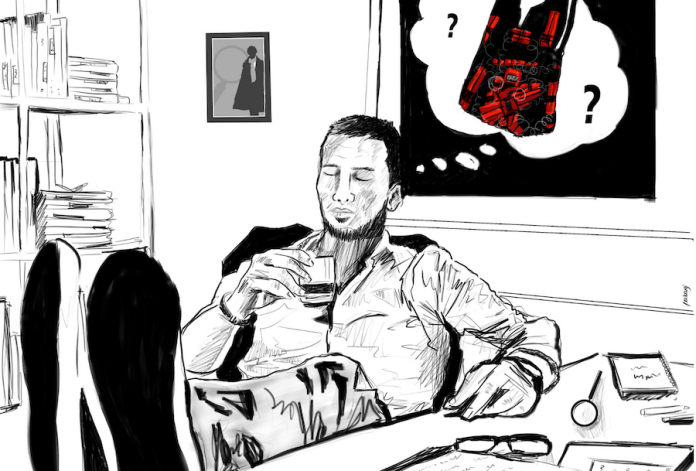 “Where are we heading?” Eric got in the car and the masked man took the seat behind him with his gun pointing at Eric’s head. The masked man kept guiding Eric till they reached an isolated home on the farm.

“Step out of the car and keep your hands behind your head.” The masked man ordered and before Eric, he stepped out, keeping his gun pointed from behind.

They left the car near the dumpster and kept walking in the silence to the house. The only sound was of the gravel crushing under their heavy feet. Eric stopped at the door of the house and without turning back asked.

“Just step inside and don’t try to act silly, it will cost you a lot more than you have ever contemplated. Eric turned the doorknob and opened the door.

“Sit down and don’t… I repeat… don’t try to do anything stupid.” The masked man pointed the gun towards the sofa and sat across Eric a few feet away.

“So what’s the purpose of this meeting? If you want to talk, you could have done it very well at my place. Why you made me drive miles away here?” Eric spoke scanning the house that was neatly kept. The masked man ignored Eric’s words and spoke.

“You had been searching for the suspect who was a suicide bomber.”

“And what’s your interest in it? Are you the one?” Eric asked leaning ahead.

“What will you do?” The masked man asked.

“Do what?” Eric asked with raised eyebrows.

“If you have a well-settled life, a happy family and a small business. Won’t you prefer to have a peaceful life?” The question from the masked man was hinting something that Eric was trying to pick up.

“Of course yes, and I think anyone who has that life will prefer it.” Eric was keeping his words as low as possible. He knew that there was someone else also in the house, hidden in some corner.

“The name of your suspect is Richard. I will not disclose his last name as it will give you a reason to link his religion with whatever he was about to do.” The heavy sigh of masked man could easily be felt by Eric.

“Go ahead… I know you know a lot more than a name to tell.” Eric didn’t want to miss this chance. He was desperate to get to the last thread of this cold case. A cold case never means a closed one.

“Like you and any other citizen of this country, Richard too was a law abiding citizen of this country. Small business of a restaurant chain and a happy family. People around Richard always felt light-hearted and warm welcome from him. A kind hearted guy in this bitchy world.” The masked man eased his grip on the gun. His finger was now no more on the trigger and Eric’s eyes didn’t miss it.

“That’s a fatal error.” Eric’s words hum in his head.

“Don’t think that… You cannot get me and you know that.” The masked man spoke as if he could hear what Eric said in his head. Eric smiled and could sense that the face behind this mask has a smile on that face too. The masked man continued.

“Like every person on this earth, Richard had his own demons to battle with, he had a dark side. A habit, he never thought will cost him more than ever, he could have thought. A habit of gambling.”

“It was just like another gambling night where he will secretly take the entry in the casino and play his game, POKER. The players today were new faces among the old ones but Richard didn’t mind till they all wanna play. He was good if not best in the game.”

“What Richard couldn’t figure out was that it was a setup, a trap to lure him into doing something which will label him as a terrorist. The game was rigged. Richard took heavy losses that night that he wouldn’t be able to repay it with whatever the money and assets he had.” Another sigh from a masked man let Eric think that who was this masked man.

“Richard had the only option left, to do what those people say. They took him to the hotel room and gave him the bag stuffed with C4 explosive who’s circuit was connected to a cell phone. Richard was to carry that bag to the cafeteria opposite the stock exchange building. Richard had no option left. Either way, his life was coming to a tragic and awful end.”

“The people who had planned this belonged to the terrorist organisations whose name could easily send chills down the spine of any human on this earth. Richard carried that bag and he was given a cell phone which he was supposed to answer. He knew it that if he will answer the call the bomb will be triggered and along with him he would be taking so many innocent lives who had nothing to do with these bloody people.” The masked man removed the hoodie but his balaclava was still on.

“At the last moment, when he closed his eyes, he could see his GOD guiding him. That changed Richard’s mind and he didn’t answer the call and flea from the site.” The masked man turned silent now. The air of silence was only making Eric more anxious to know every damn left out thing.

“So where is this Richard…?”

“You are a very impatient person, Mr. Eric. Just turn to look at your left.” The masked man leaned back in his chair.

Eric saw the bag pack lying below the television set table with eyes wide open. It was a C4 explosive bag, a bomb. Eric reached the bag and carefully opened it to see that it was still a live bomb.

“Where is this god damn Richard?” Eric ignored the gun this time and marched towards the masked man.

“I am Richard… But not the one you can catch up.” The masked man removed his balaclava and pointed the gun at the gut of Eric. They were now inches away only.

“Just walk back behind the sofa you were sitting.” Richard pulled the hammer of the gun. Eric took the steps back without tacking his eyes off Richard. Richard was smiling now.

What next Eric saw drained off all the blood from his body and his face turned pale. It was the body of Richard lying lifeless on the floor with a wound of a bullet on his right temple. Eric immediately turned to look Richard who was standing in front of him.

The man disappeared in the fumes of smoke with a smile on the face leaving his lifeless body on the earth….