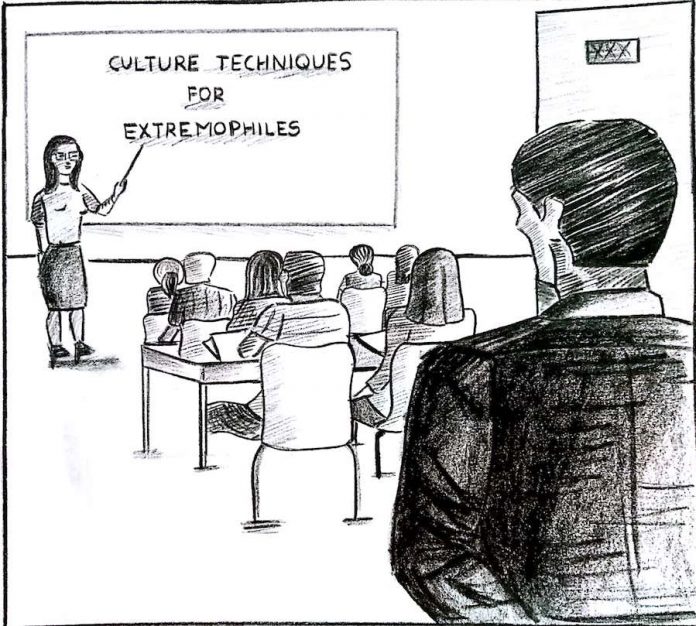 It was a new day for everyone but, a much awaited one of his life. He was standing in front of the college building. He had stood there for a while, staring at the building of one of the premier institutes for the graduation in the state. He never thought he would be there, ever in his life.

A security guard at the gate, after confirming his appointment, let him in. He stepped on the campus with mixed feelings of nervousness, anxiety, and excitement captivating his heart. The moment he stepped inside the main building, he was struck by the lightning of the memories. He could not stop himself from taking the round of the ground floor and slowly heading to classrooms.

At an end of the corridor, there was a small classroom for the T.Y. students of Biotech stream. He could not resist and walked ahead just to see the ongoing class. The door was wide open. His vision was getting blurred and he frowned to have a closer and clear look.

It was a tightly packed small class of T.Y. Biotech students. A ma’am named Prisha Kothari, was teaching fermentation biotechnology. He glanced at the board to see the topic of discussion. CULTURE TECHNIQUES FOR EXTREMOPHILES was written in bold letters on the board.

Ma’am was busy with her lecture and the only students who seemed interested were in first few benches, jotting down the important points. Rest of the class, though pretended to be attentive, was lost in their own world. He shifted his gaze to the last bench. Sujit was sitting alone, noting down the points but still lost in his world. Ma’am explained something to which Sujit smiled. Ma’am saw Sujit smiling and got pissed off.

“And what makes you smile Sujit? Is there some kind of joke going on here?” Ma’am was loud enough to be heard outside the classroom.

“No, ma’am, I am not smiling.” Sujit stood up and replied sheepishly, still unable to conceal the smile on his face.

“You idiot, how can you be so ridiculous? You are still smiling and saying that you were not. Why the hell are people like you even allowed to take admission in such a prestigious institute?” Ma’am’s tone was rude and loud.

“Ma’am, I did nothing to disturb you and you are insulting me.” The smile on Sujit’s face vanished.

“To get insulted one must have some respect, you idiot.” Ma’am’s voice was loud, reverberating in the whole corridor. She didn’t stop at this and continued.

“Ma’am, I feel, you are now crossing the line. I am not at any fault. I was concentrating on what you were teaching. I did absolutely nothing.” Sujit was breathing heavily now.

“I don’t know what’s your problem with me ma’am and now, I am no more concern also.” Sujit paused to calm his nerves and took a deep breath before continuing.

“Talking about what I’ll do in my life, I too don’t know but, I promise you, one day I will be sitting next to you in this very department.” Sujit’s voice rose beyond the level of courtesy.

“That will never ever happen till I am alive. Never ever, you got that? Just get lost from my class!” Ma’am was at the loudest of her tone.

Sujit packed his notes and left the class. Just as Sujit reached the classroom exit, he stopped to turn back and spoke.

“Ma’am you had been explaining the culturing techniques for extremophiles. What you explained last, is the use of nutrient agar as solid gel media for isolating thermophiles.” Sujit paused and let his words seep in her head. He then continued.

“And I would like to correct you here. The media you suggested, cannot withstand the temperature above 60 degree Celsius, because it will melt at that temperature and thermophilic bacteria cannot be isolated because they can’t grow below 70 degree Celsius.” Sujit was now loud and clear for the whole class to hear what he was saying.

“And ma’am, all the information is very well quoted in the 6th edition of Fermentation Technology by Stanley and Whittaker. Being more precise, it is in chapter number 28. Do refer it, if you doubt my words.” Sujit stormed out of the classroom, leaving Ma’am and other students with jaw-dropping open mouths.

The smile on Sujit’s face was enough to shatter the ego of Ma’am. Nobody ever expected this, nobody ever dared to talk to the soon-to-be HOD like this.

He was watching all this standing outside and could not believe the incident that happened. His heart skipped a beat. He swallowed the lump in his throat with great difficulty. His head started spinning and made him feel a bit dizzy. For a moment, everything blurred in front of his eyes.

The lab assistant called him and asked him to wait in the lab on the top floor. As he entered the lab, his heart started pounding in his ribs. He pulled one of the stools resting under the working platform and sat on it gripping his sling bag tightly. He could not resist a smile on his face.

His curiosity could not let him sit and so he went to the instrument area of the lab, where highly sophisticated instruments were arranged, required for the practicals of biotechnology. He touched them to feel it. Bliss it was.

The bell rang and the students of T.Y. started entering the lab for their practical classes. He moved to the preparation room and sat in one corner, the smile was still dangling on his face.

“With this attitude, you won’t even be able to pass. You are an arrogant and a manner less fellow who doesn’t even know how to respect teachers. And I am damn sure you won’t be able to do anything in your life.” Words echoed in his ears. Chills ran down his spine with a bead of sweat trickling down his temple. On a cool winter morning, he started sweating.

He was brought back to his senses when the same lab assistant called him and asked him to collect the required papers from the college admin office and to meet the HOD after that.

He quickly walked to the admin office and collected the papers. He could not hide his joy as his smile broadened after looking at the letter he was holding in his hand. It was his APPOINTMENT LETTER.

He went to the faculty room. It was a big hall with so many cubicles with just the glass partitions, separating them from one other. The first cubicle was big in size. It belonged to Dr. P.  R. KOTHARI, the H.O.D. He softly knocked on the door with whatever courage he had.

“Come in.” A lump developed in his throat as he heard the female voice. Short and curt was the tone of H.O.D. He stepped in and pushed the door of H.O.D.’s cubicle.

“Did you get the letter?” H.O.D. asked without looking at him and busy with a file already in her hand. He immediately placed the letter in front of her on the table and backed off.

“I hope you know the rules and regulations we follow here. Don’t step out of line.” She signed it and said, her voice was more of commanding.

“Yes, Ma’am.” He concealed his smile and replied to H.O.D.

Dr. Kothari’s fingers started trembling when she checked the letter again. Her eyes glued to the name on appointment letter. She immediately lifted her gaze. She could not believe what she saw, but it was too late now.

She kept staring at him, fuming in anger. She then looked at the pen she used to sign the letter. She angrily threw that pen into the dustbin lying in the corner behind her chair. Her fingers clenched into a fist. The disgust on her face was clearly visible.

He picked the letter and quickly stepped out of the cubicle. He exhaled out the breath he was holding on and pushed the door of the adjacent cubicle. Keeping his bag aside in the cubicle, he made himself comfortable in the chair.

The name outside the cubicle read ‘Dr. Sujit’ and below it ‘PROFESSOR’. He could not stop smiling now, as he glanced at his H.O.D in her cubicle adjacent to his. He kept his appointment letter on the table and smiled at it.

“I promise you, one day I will be sitting next to you in this very department.”  The words reverberated in his head again but this time, with a smile on Sujit’s face.

It took 7 years from the day he stormed out of her classroom, where she was teaching CULTURE TECHNIQUES FOR EXTREMOPHILES.