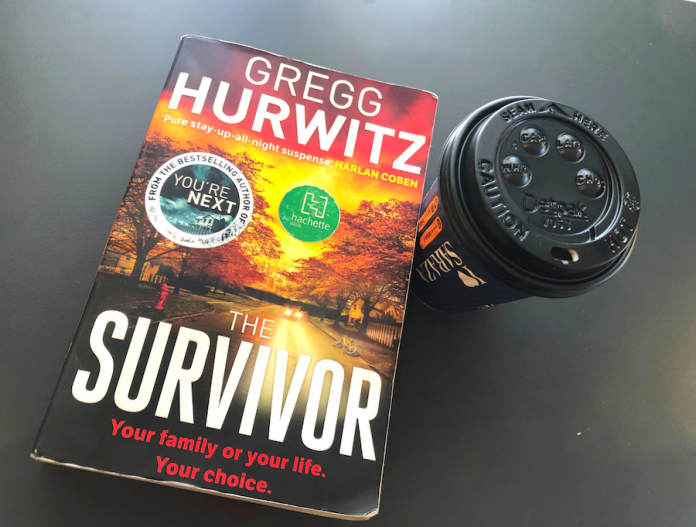 Gregg Hurwitz never fails to amuse me with his impeccable skill to create that adrenaline pumping thrill. This is my second book of this author and I am glad a friend of mine gifted me this book, The Survivor after I kept bragging about the previous book I read, You are the Next.

The book opens with on the edge scene. Nate Overbay, a former soldier suffering from PTSD and dying a slow death from ALS (Amyotrophic Lateral Sclerosis) for the past nine months is standing on the 11th floor, at the ledge of the bathroom to end his life.

Nate’s family was shattered when he couldn’t cope with himself after he returned from the army. Add worse to it, Janie, his wife has asked for a divorce and his daughter prefers to stay with her mom, Cielle. The guilt of not being able to save his friend, Charles, and others made him ruin his perfect family life where he couldn’t bond back with them.

With nothing left for Nate to live for, he is about to end his life on a sunny day in Los Angeles. A step in mid air, he hears the gunshots. The bank is robbed in mid day, with robbers shooting staff and customers to accomplish their heist.

A last good dead before dying, Nate gets into the battle and takes out one by one the members of the gang with his impeccable firearm training during his army days. However, the last one leaves him with a strange message. “He’ll make you pay for this.”

From committing suicide to becoming a hero of the day, Nate Overbay didn’t know on which turf he stepped this time. Pavlo, a ruthless Ukrainian mobster, was the mastermind behind this heist. The heist was not only for wealth but something more valuable to him than all the wealth in the bank.

Nate faces inevitable when Pavlo’s man brings him to Pavlo. There is only one condition for Nate to keep her daughter alive, by retrieving the envelope from the bank locker for which the heist was organised by Pavlo.

Nate is, either way, dying slowly but he couldn’t let his family die cause of his heroism of stepping into the heist of Ukrainians. As the ASL gets worse, Nate has to battle against all odds.

“Will Nate Overbay be able to retrieve the envelope Pavlo wants?”

“What is in that envelope that Pavlo is ready to slaughter Overbay family if Nate fails to deliver it?”

“What is the angle of FBI agent?”

“Will Nate break into the bank to retrieve Pavlo’s item?”

“Does Misha have anything more sinister on his mind?”

MY OPINION: As I said earlier, this is my second read of Hurwitz’s books, and boy, this guy has a way with words. The way Hurwitz narrated is something different from the thriller fiction I have read and that’s what makes him among my favourite authors’ list.

The opening pace of the story is breath taking with Nate about to end his life and getting tangled in a gunfight in the bank heist. So here you might think the pace will be the same throughout the book but hold on, it slows down in between letting you breathe.

The character development is good. I in particular liked the description of Pavlo and his ruthlessness described, his past, and not to forget the tattoos on his body. While you are halfway, you feel it’s over. What could be next and ahead, though it seems predictable but there is a lot more. Twists, turns, obstacles hurled in the way. Layer upon layer of situations, moral dilemmas, problems, and adversities.  All I say is, you just can’t miss this thrilling ride of a roller coaster and in the end, only you’ll come to know who’s THE SURVIVOR.