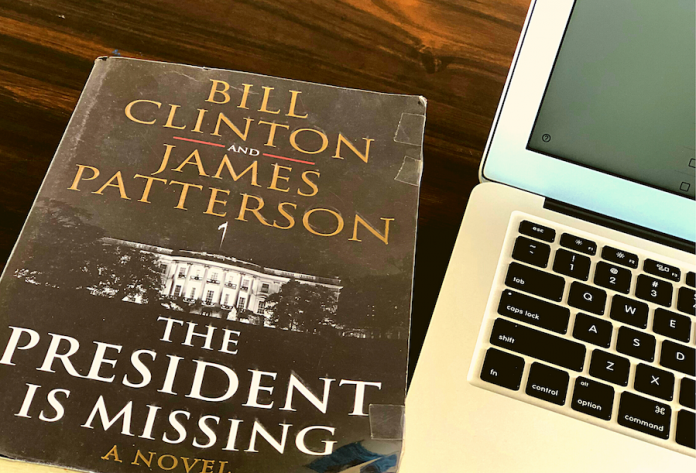 Title: THE PRESIDENT IS MISSING

With Duncan notifying his shadowy decisions without keeping other political lobbies in the loop, a group of snivelling political opportunists intent on impeaching the POTUS. But that’s not what is bothering Duncan right now.

Duncan was a military veteran who has served as a prisoner in Iraq and patriotism still flushing through every vein in his body. Duncan is more concerned about a group of terrorists, ‘Sons of Jihad’, who is some kind of secular extreme nationalist that is against the western influences across the globe.

Nina, a no white house person enters the story and who’ll only talk to the president with given a work DARK AGES that was enough to rattle the spine of POTUS. It was a big risk but Duncan is left with no choice but to meet her.

Deep down his heart, Duncan could see his worst nightmare surfacing to the reality of the country which is now confirmed by Nina with that one word… DARK AGES… It’s a kind of terrorist attack that will crumple the world’s most powerful country, America to its knees and will leave it vulnerable to the whole world.

After meeting Nina, the president is the only one who can take this into his hands without any aids and leaves the White House, ditching his secret service perimeter to disappear in the civilian world.

Bach, a female assassin who has killed many high profiles on every continent is now behind Duncan. Bach has an impeccable record and she could not afford to miss this time.

Will POTUS ever return to White House…?

What did Nina said to the president that made him leave the White House clueless and go rogue…?

Will DARK AGES be the reality of America…?

Will Duncan be the hero this time as he was in Iraq…?

To get all these answers, pick this high voltage action thriller… THE PRESIDENT IS MISSING… by James Patterson and Bill Clinton.

The book is full of everyday high concept thrillers making it an ideal pick to kill your airport boredom. The pace of the story is fast and high pitched with a well engineered plot. And that’s a classic Patterson book.

The short chapters of the book have a lot to know about white house politics and functioning for non-American readers. Every chapter has a pinch of adrenaline that will not let you keep the book aside despite its page count.

Honestly, being a fan of James Patterson books, I’ll definitely recommend this adventurous, action packed thriller… THE PRESIDENT IS MISSING…