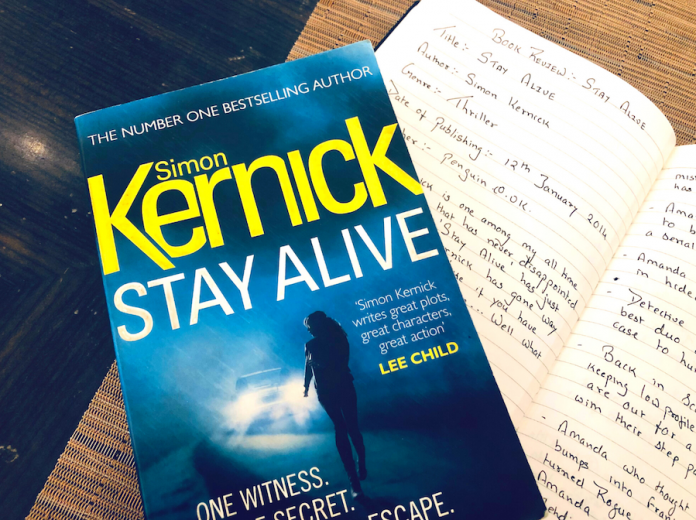 Simon Kernick is one of my all-time favourite authors that has never disappointed me so far. But this time… ‘Stay Alive’ has just stumped me and Simon has gone way beyond my expectations. It’s like if you have not read this book, well then… what have you read…?

The book opens with Amanda Rowan who arrives at her home only to discover the most tragic day of her life. Her husband is in their bedroom with his mistress. Adding worse to it, Amanda’s husband and his mistress were murdered brutally and the killer has yet not left the house.

Amanda makes a run for her life only to be chased by the killer, The Disciple, a serial killer that was just done with killing Amanda’s husband and the other girl. Lucky enough, Amanda could save herself from attack and goes under hideout at a safe-house in Scotland under the Radar of Police.

Detective Mike Bolt and Mo Khan, the best duo of the crime squad are in charge of the case and on a chase to hunt down the Disciple. Bolt somehow was not convinced with the picture of crime that lay in front of him and makes a search for the least suspected person in the story.

Back in Scotland where Amanda was now breathing a sigh of relief, Jess and her sister Casey were out for a day trip canoeing along with their step-parents, Tim and Jean.

Frank Keogh, a policeman turned rogue and now working for some high profile gang leader is on the hunt for Amanda with his team of nasty men Mehdi, Sayenko, and Maclean. The orders were clear to Frank, ‘Get Amanda alive and kill anyone who steps in between.’ Amanda is again on run with Frank and his team pursuing her.

With heavily armed and ruthless men on the tail of Amanda, she crashes into the middle of the canoe trip of Jess and her family. The mayhem begins with Jess’s step-parents shot dead at the sight by Frank and his men.

Bolt’s investigation in Disciple’s case takes a weird turn only to make him and Mo Khan get embarrassed in front of media and society. Bolt takes it personally and investigates the case with a fresh angle.

Bolt and Khan decide to visit Amanda with a fresh set of questions lurking in Bolt’s mind. Surprisingly, no one has any whereabouts of her and that’s when the news of shots fired in the forest are reported.

An ex-SAS soldier known as Scope enters from nowhere and gets involved in this hunt, turning the action more relentless with body count keeps on increasing.

With everyone caught up in the action in the forest of Scotland what will happen next…?

Will Amanda and Jess could save themselves from this manhunt…?

Who is the Mysterious boss of Frank…? And why he wants Amanda alive…?

STAY ALIVE is an absolute heart thumping page turner that is truly unputdownable. With nail biting action from the first page, it was hard for me not to think of what will happen next…?

Most of the thrillers that I have read have an adrenaline spike in the story to keep the pace up. But with this book, you’ll wait for a deep as its adrenaline rush is high from the beginning.

The small chapters let you breathe in between without slowing down the pace of the plot. The story continues from two trails where at one end Mike Bold is investigating the case of a serial killer and from the other end Amanda is making a run for her life and tangles the innocent family on the day trip. It all makes you curious about what would be happening at the other end.

Of all the books I have read of Simon Kernick, I must admit that Stay Alive has given me the goose bumps all over right from the first page till the climax. I loved the character of Scope with shabby past and his will in life to stay which he could never. The emotional turmoil and action have been all time high.