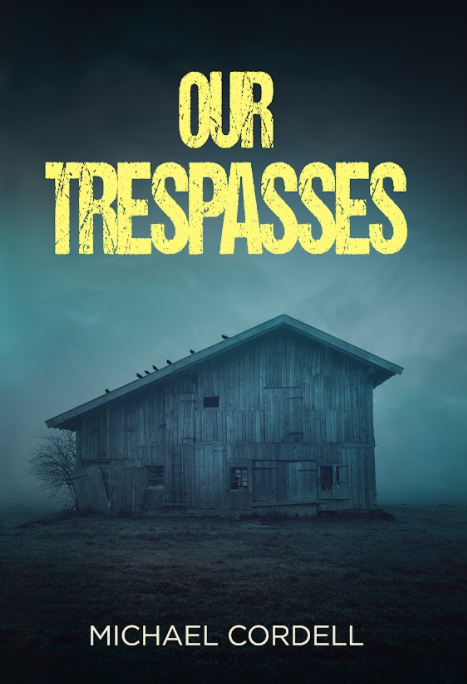 This is my first book Michael Cordell and I was tempted to lay my hands on it after just reading the title, Our Trespasses. The title only was not intriguing but there was something that poked me after reading to which genre it belonged. And I must confess as I have completed reading it that it’s one of the amazing novels I have read.

The story is of twin brothers, Mathew (Matt) and Jack from Hatchett in Nebraska, a place where people prefer peace living life to those happening days of a big city like New York.

Matt and Jack departed in their teenage when Matt decides, for some reason, to move to New York. But there is something that kept a bond between twins, the connection they shared by birth which is rarely seen in the twins. The hope of Matt to escape it with the distance between two brothers.

After ten years in New York, living a meaningless life as a cook at some cheap food joint, Matt is completely detached from family connection and especially no touch with Jack and his Mom and that life of Hatchett where he grew up.

One day while Matt was in a bar, he felt a terrible pain, a kind of attack that killed him except, he was not killed. Matt realised that his brother, Jack has been brutally murdered who is miles away from him and with whom he has not talked much in a decade.

Matt returns to Hatchett to attain Jack’s funeral. Even after a decade, there is nothing much changed in his home town and few things were just way beyond what he could comprehend. And he felt it with the attack on him just as he stepped his foot on the soil of Hatchett.

Matt feels the agony of the afterlife of Jack and realises that the connection between them is not severed after the death of Jack and Jack is in one of the most terrible places, in Hell.

Matt chins up to get on the track to what led Jack to land in hell and in the journey he discovers that Jack was a filthy scumbag of town that kept meth (methamphetamine) running in the veins of the youth of the town and has enemies in every street.

Matt needs to discover that one person who has been hurt most by Jack and that person could be a killer with that secret note he found at Jack’s place. He needs to find this person at any cost before something more happens.

Leaving no stone unturned, Matt is on a hunt to find the killer and to cut off that connection with Jack. But there is someone who has discovered this twin connection and is taking the realms in his hands to find an escape, the Prince.

The childhood love of Matt, Claire, is running her father’s restaurant and is fighting her own battles to keep the business clean. The biggest hurdle for her is this guy called Bone, a school senior of Matt and a bad asshole of the town that doesn’t give a shit to authorities.

Seeking the path of God to break the connection with Jack’s afterlife, Father Pearman, better known as Andy to Matt teams up with Claire and Matt. But things are way beyond Andy’s fathomable faith in God.

Sheriff Wilson, a kind hearted man who is troubled with the meth trade in the town by many lowlife punks like Jack, is trying to maintain the distorted law and order situation of the town. Wilson advices Matt not to trust anyone as money from the meth can do anything to turn the tables on him.

With the sand of time slipping through the fingers of Matt, will he be able to get hold of Jack’s murderer…?

What it is that Claire is battling with and that had happened a decade back…?

Will Sheriff Wilson be able to crack the meth network that was drowning the youth of Hatchett…?

Can Prince overpower Matt and leash out the chaos in the world that he is hell bound to do it…?

To find out more… pick this book… “OUR TRESPASSES”, an absolute nail biting and page turning thriller by… Michael Cordell.

Michael Cordell is the new author on my bookshelf and I must admit that this book ‘Our Trespasses’ has just left me stunned. I rarely pick a different author rather I stick to my favourite list and Michael is on that list now.

I wonder how it’s possible to narrate such a fantastic thriller in 200 pages.  It’s the absolute dedication and focused energy of Michael Cordell that kept me tightly bound to my chair till the last page of the book.

The story is kept on a tight leash with apt nurturing of the characters. The pace of the story is fast however you might feel the initial few chapters slow. But once it has picked up the pace, it’s truly intriguing taking you on the ride of a roller coaster where you get ups and downs of adrenaline rush and leaving you to crave for more and curious for what’s next.

There is something hidden behind the storyline that has touched me, a kind of advice that you can discover in the climax. And I feel that every human on this earth needs to understand the importance of it. Share it in the comment box if you could discover it.