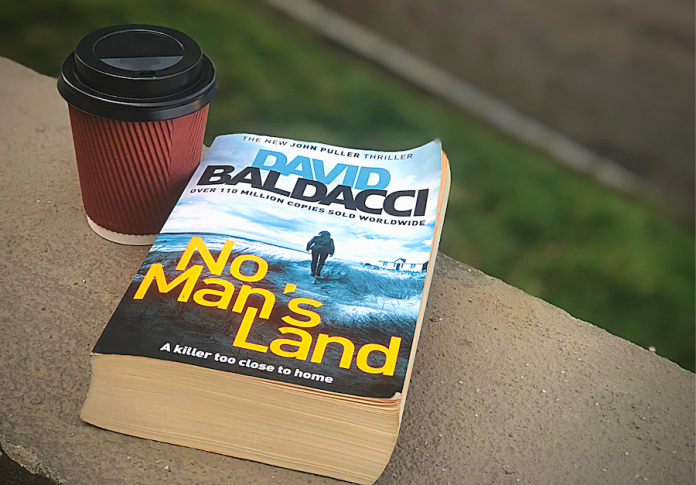 “NO MAN’S LAND” the 4th book in the John Puller series by David Baldacci is a nail biting, action packed thriller that will give you goosebumps with every page you turn. The craving for more will keep you up all night till the last page of the book.

John Puller, a former Army Ranger, and CID officer now in US Army is back home from his recent assignment, only to discover the unsolved tragedy from his past is now standing face to face at Puller family’s face and ready to hit hard on their faces.

30 years ago Jackie Puller, John’s mother, went missing without leaving the slightest trail behind. Every government security agency like the FBI did all they can just to return empty hands with no closure. None of them could do justice to Jackie’s missing case.

But now, after three decades, things changed drastically with one letter that was written to higher authorities about Jackie Puller’s missing case, a letter from a family friend who is on her death bed, accusing John Puller Sr.

John Puller Sr., a 3-Star General and a decorated war hero, is now losing the battle against dementia in the hospital and could now hardly recognise his sons, John and Robert. With a fresh lead in the case, two CID officers met John in the hospital and brief him about the developments.

The higher ranks in the authority don’t want John anywhere near the investigation as it was about his father. John, with impeccable investigation skills and the ranger emotions still alive in him, will not step down no matter whatever is at stake.

John, with his brother Rober, a Major in Air Force, and Veronica Knox, John’s best friend who is working for some shadowy U.S. Intelligence are all set to turn every stone they need to for uncovering the truth about Jackie and to save the Sr. John Puller.

Paul Rogers, a convict for brutal murders in the history of mankind, serving for 10 years in high security prison, is on parole and with no intention to return to the prison. Paul is a freak with some inhuman capabilities that can scare any maniacs. He is on a mission with a personal vendetta that all started 30 years back. Paul will not stop till he reaches that person who turned him into what he is today. Anyone standing in his way, Paul will kill, no matter what.

Fort Monroe, a military establishment where John and Robert have spent their childhood and where Jackie went missing is the only lead for John to begin with. It all began from there and John wants to give a fresh start to investigate the case.

Paul is running out of time, with the clock ticking like a time bomb in his head is all set to reach Fort Monroe, the place where he came for first when he stepped his feet on American soil.

Will the paths of John and Paul will cross ever…?

Are the strings from past pulling John and Paul to building Q at Fort Monroe…?

Why the highest ranks in the U.S. military and government are sweating with John and Paul reaching to the end for what they are set out for…?

To get all these dots connected and answers… read this fascinating thriller that will take you on the ride to a roller coaster of incidents… NO MAN’S LAND… By… David Baldacci.

MY OPINION: David Baldacci is one of my favourite authors when it comes to U.S. Army thrillers and I can’t let myself not laying my hands on his books. NO MAN’S LAND is another such typical thriller from him with my favourite character Veronica Knox. With the kind of personality that is depicted of her, it has always been interesting to know what will happen now when Knox steps into the story.

The fascinating storyline with characters in emotional dire makes it a perfect combination for an impeccable thriller. The short chapters with a fast pace of the story will keep you fasten to your seats.

The dramatic twist, the elements of surprise, and bites of adrenaline with every page you turn to not just stop till the last line. You may feel you have predicted the storyline but that never happens with David Baldacci. All I want to say is if you love thrillers, this book should find a place on your bookshelf.

EVERYTHING AT STAKE Part 2