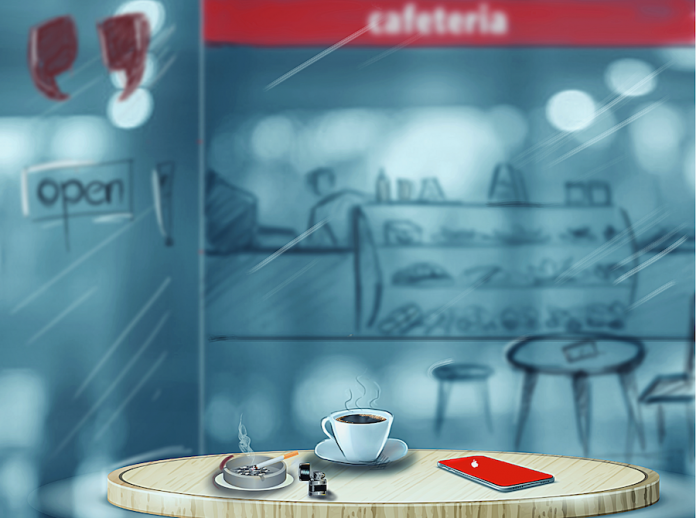 The next day began with everything that was a routine with almost no changes. Raghu took the same path and his same bowl with his same steps and stopped at the same spots. While reaching the cafeteria he had yesterday’s thoughts of D.K. Sir floating fresh and he wasn’t much astonished to see him sitting right at the same place where he was yesterday.

Finishing his first coffee, D.K. knocked on the glass door and ordered another black coffee for himself and a sandwich for Raghu. Raghu effortlessly started off with his stereotype blessings to which D.K. was all deaf ears and his eyes as usual glued to his iPhone screen.

Raghu’s curiousness was scaling high with every moment passing by, he could guess that the man never seemed to have his boots from the same city. He hasn’t come across such a down to earth fella yet…

D.K. was a low key was obvious through his gestures or the way he handled his phone calls which were once in a blue moon affair. A shiny platinum chain and a diamond ring were enough to prove his riches but what amazed Raghu was his mode of travel, an auto rickshaw. Who in the world uses it every day?

This was a routine that continued for a week ….

It was the onset of winters and soon the temperature of the city will be falling, making the plight of beggars worse with those chilling nights. One such evening when everyone should have been back home Raghu was shivering and involved in formal-informal discussions happening as the Prime Minister of the nation declared demonetization. A whole lot of hot gossip with tea was all revolving around it.

Raghu heard from a few bank employees and finance people that this overnight decision of the Prime Minister was to get the black money back and stop the money laundering business that was eating up the economy of the country. Every single person was talking about it. Raghu smiled at himself since he has nothing to worry about.

The next morning bloomed and Raghu was back at his old spot, the cafeteria. Today the entire city was baffled, the long queues at the bank and the mobs of people making their ways to banks had changed the entire picture. One more unusual thing that happened was, D.K wasn’t there. No DK means no meal…

The nation was on its toe now with every government machinery to bring justice to the Prime Minister’s decision irrespective of what their personal opinions were. Raghu kept trying his luck with other people but it was hard since the days that he had spent with DK around seemed like a dream now.

A week had passed after the announcement of demonetization and people were still struggling to settle down their blacks to whites but the hosh posh of the city was subsiding slowly.

Raghu was back at his spot near the cafeteria waiting for some leftover food or a person who would be merciful enough to sponsor the sandwiches again.  But… Guess what…? He saw D.K., stepping out of the auto and heading to the cafe. His joys had no bounds on seeing his meal provider but nothings same

As usual, D.K. ordered his black coffee. Raghu was waiting for him to notice his presence but D.K. was lost in his mental turmoil. D.K.’s composure was calm as before, his eyes revealed absolutely nothing. No ordinary person could have noticed it but then Raghu was a keen observer. He could sense D.K.’s anxiousness in his hand where he was flipping his iPhone and this time no music plugged on to his ears.

Raghu took a deep breath and with the help of his wooden crutch, gathered all courage to go near him. The rattling of coins in Raghu’s bowl brought back D.K. to his senses. Their eyes met and D.K. smiled, he knocked on the glass door to order his sandwich. His eyes then fell on his begging bowl with just a few pennies in it. D.K. smiled again and pushed a 100 rupee note in his bowl.

“Don’t you think you gave too much…?” Raghu asked without taking his stare off  D.K. Letting his crutch drop and keeping the begging bowl on the table, Raghu stood in front of him with his arms folded across.

Before D.K.’s overthinking brain could comprehend what was happening, a bunch of cops with their guns pointed at him stood around Raghu.

“Mr. Dhananjay Khanna a.k.a D.K., you are under arrest under the act of money laundering.”  Raghu said in a stern voice.

Aghast D.K. got up slide his iPhone into his pocket and asked him

“Arrest him and take his phone in custody.” Ranveer Sing ordered the cops accompanying him. The road traffic came to a standstill and D.K. was handcuffed and surrounded by cops was being walked to a police van.

Ranveer Sing, who was talking on the phone with his seniors just ended the call as D.K. reached the police van. Ranveer leaned over the D.K.’s shoulder to whisper in his ears.

“Don’t throw your bills anywhere, especially when it has your mobile number on it. You should have kept another mobile for your dirty transactions.”