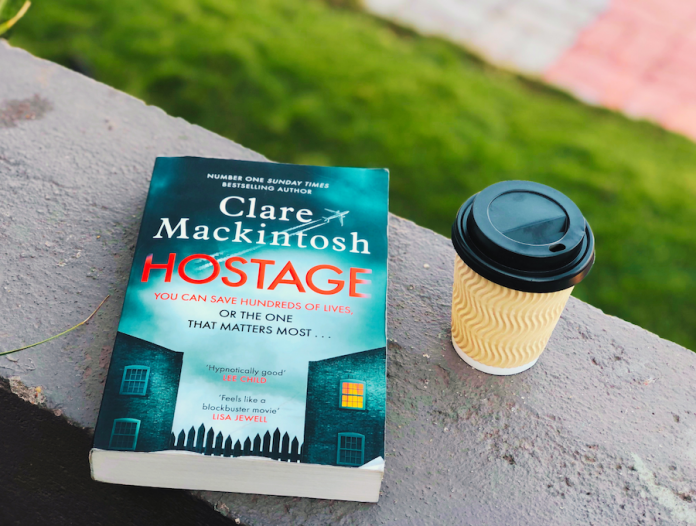 Hostage by Clare Mackintosh, an award-winning author, is a standalone psycho-thriller that will take you out on a roller coaster ride, 30,000 feet above the ground, in the mid of the air where you have no place to run. Clare Mackintosh is among the top 5 favourite thriller authors on my reading list and I cannot think of resisting myself from reading her latest work, Hostage.

Mina, a flight attendant, is struggling in her family life with Sophia, her five year old daughter, adopted, and her husband, Adam, a cop with dirty habits and hiding something that will cost their life terribly.

The marriage life of Mina has hit a rough patch, a patch that might cost her family life and Mina is not willing to get things better at least with Adam. All the credit for being distraught goes to Adam who is accused of sleeping with their Ukrainian au pair.

With all the mess going on in Mina’s life, she is seeking a gateway for a time being from Adam. In search of her escape, Mina trades her shifts with other colleagues to join the crew of a history making, maiden flight of World Airways Flight 79, a 20 hours non-stop flight from London to Sydney on a Boeing 777 with 353 excited hearts.

To become part of this historic flight, the onboard guests are celebrities, journalists, bloggers, and enthusiastic frequent flyers along with other ordinary people who got lucky to get themselves on the travellers list. Well, ordinary is not always the ordinary, it can be sometimes a facade to hide within.

Among this diverse list of passengers, there is a mysterious group whose members have never met. They barely knew each other from their online platforms, through some code name of rivers across the globe. The group has already blended perfectly with the other flyers but they have a single agenda… The flight should not reach its destination.

For this mysterious group to get their plan to work perfectly, they are all equipped to crash the party mid-air and to create havoc and chaos not only on the flight but across the soil of London. For their plan to work, Mina is a vital cog for them, though unwitting. To make Mina comply, they have called a long shot with Sophia, Mina’s daughter, at the center of the bullseye.

With the takeoff, the joyous celebration in the historic flight started along with a bar serving complimentary drinks. The journalist, bloggers had already pulled out their pens to note down their experience of every hour of this flight journey. Every passenger on the flight has a share of their story from their past, their battles whether fighting or escaping and somehow landed on this flight.

Mina was busy attending the business class passengers. Every passenger has a story and is designated with their seat numbers. Things were running smoothly if not better with a minor hiccup that Mina was trying to swallow without letting a tight knot clench her stomach till one of the passengers is dead on the flight with massive cardiac arrest.

The sudden death of the passenger shocked everyone on board but Mina in particular was rattled with a discovery from the wallet of the deceased passenger, the photograph of Sophia from her school. Her wildest nightmare was surfacing to reality when she finally receives an anonymous note from someone on the flight leaving her shocked and in harassed mental state. The note clearly instructed that Mina should open the door of the flight deck and let someone in who is disguised as a passenger inside the cockpit.

Back at home, Adam was trying to cope up with Sophia who gets hyper at a times and can easily detach from her stepfather. The new nanny, Becca, tries to keep Sophia distracted and calm in absence of Mina. Things turn worse when a guy comes knocking at the door of Adam, beating the shit out of him, leaving Becca and Sophia startled, hiding behind the door of the room of Sophia.

Once Mina does what she should not, the flight slides under the control of a mysterious group of hijackers disguised as passengers. The C4 explosive loaded jacket under the pullover of one of the hijackers leaves everyone on the flight stunned and aghast, sending tremors of panic and chaos. Their life was hanging on the thin wires that connected the detonator and explosives on the vest.

Adam soon finds himself in a claustrophobic and horrid situation with Sophia in the basement of the house. His hands are cuffed behind on the steel pipe and a slow humming of radio from the kitchen is the only sound heard by the father and daughter in the dark and musty basement. Struggling cop, Adam, is trying every possible way he could to get his daughter out safely. But where is the Becca…?

“Will Mina surrender to the captivators on flight…?”

“What is the agenda of hijackers…? Are they some radicalised terrorist or someone with more sinister agenda on their mind…?”

“What is Adam hiding from Mina…?”

“Will this historic flight ever land safely at the destination…?”

MY OPINION: This is my fourth book by Clare Mackintosh and just like her first book, I Let You Go, this book, Hostage is truly unputdownable. Clare Mackintosh’s work has never disappointed me and I have always enjoyed every bit of it.

The initial pace of the story is a bit slow, reflecting the distressed marriage life of Mina and Adam with Sophia the only thread keeping them linked. The shaky marriage life is a cause of the trust issues that Mina had after her discovery about Adam’s character. However, as the flight takes off and so as the story, it will keep you tightly clenched to your seat.

Character building and nurturing is something you always miss in many action packed thrillers but not with Clare Mackintosh’s books. With the high tensed drama mounting, the slow build of the high tension is something that will make you forget to breathe. Keep breathing in and breathing out.

I enjoyed the dual storyline with an equal amount of tense and gritty atmosphere. At the end of every chapter, your heart will keep hopping between the flight and Mina’s home. And just when you think the story is over, you will be stumped with what is coming ahead. The climax is not where you think, it’s where the author has kept it for you.

If you are at the airport, waiting to board your flight, please… don’t pick this book as for the first you might not board the flight. If you still board the flight, all your eyes would be scanning for Mina and other characters…